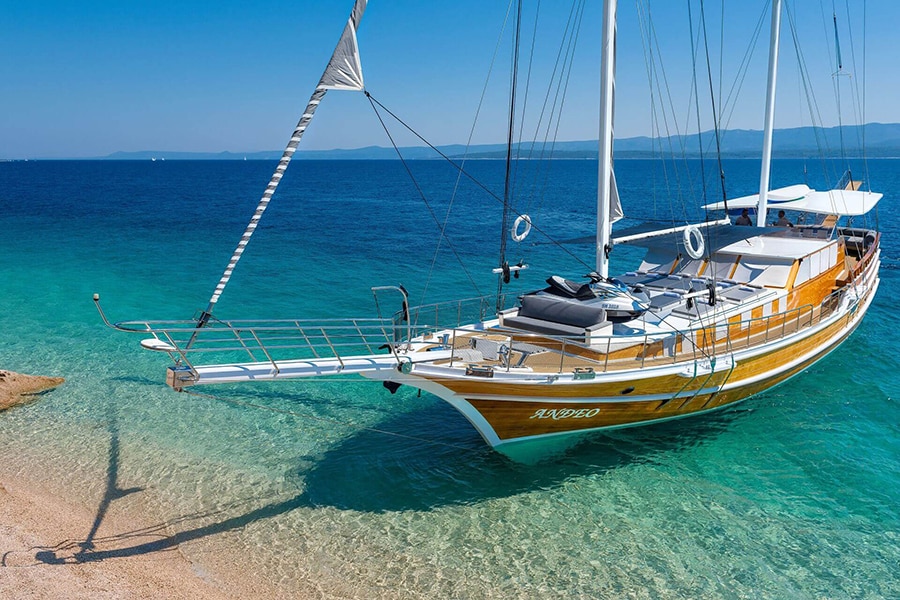 The sails billow, pushing you onwards, cutting through seas so clear you seem to be sailing on air. The scenery feels familiar and yet appears oddly new like there is something different about it, something you can’t really place. The rocking motion of your Gulet lulls you into a comfortable sleep, occasionally waking you up with a nudge to appreciate the fantastical scenery passing you by…

It might sound like an enticing opening to a literary fiction – but it’s not. You are on route on a yacht charter to one of the most beautiful and underrated coasts in the entire Mediterranean basin. We have already spoken about Turkey’s beautiful southern coast and sung its praises. The people who dubbed this area the Turquoise Coast were on to something: the sea’s splendour, backed by forests and jagged mountains are truly a unique marvel to be discovered. So let us launch headfirst into the route which would charter us past where the ancient Lycians first made their home. 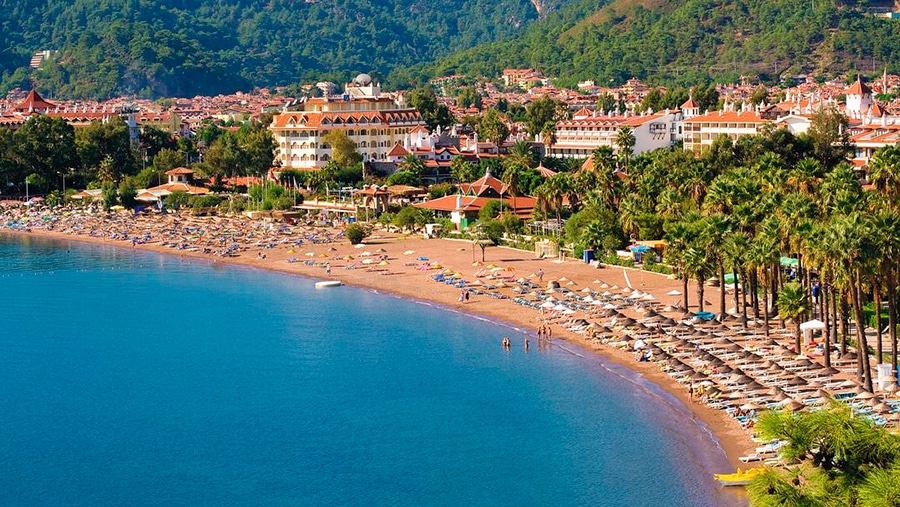 We start at the seaside resort of Marmaris, where the castle on the hill compliments the pebbly beach and hugs the bustle of the town. On land, the city is full of life and offers the visitor anything he or she might want for; restaurants, bars, activities, history… From the water, the harbour is a pretty sight to feast your eyes on. Breathe in the smell of cooking seafood before you’re whisked off to your next stop. 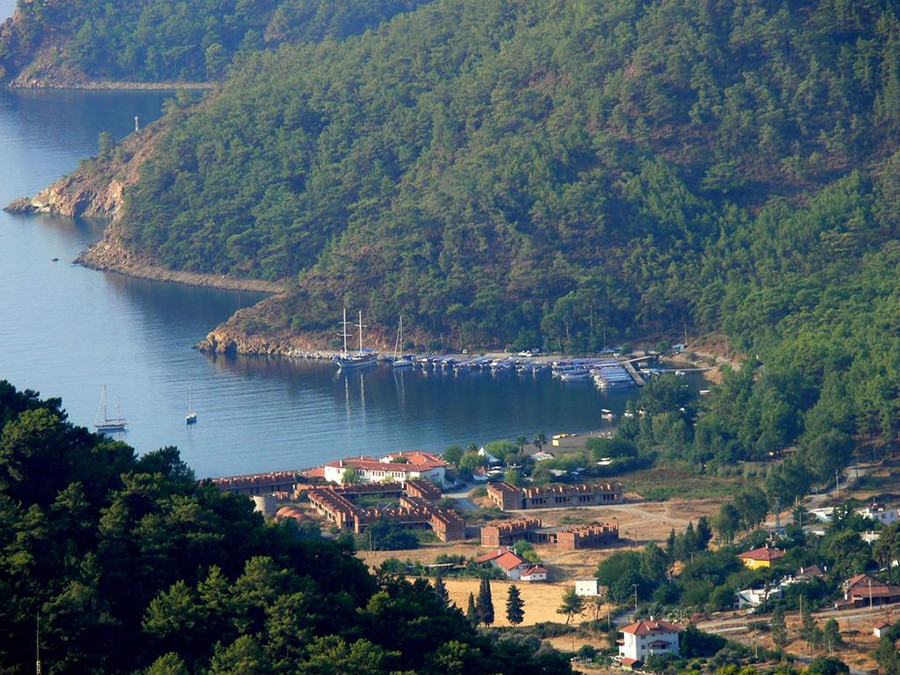 Much smaller than Marmaris and enclosed on all sides by rolling hills of dense woods, Ekincik gives the visitor a sense of privacy lacking in other stops.  At Ekincik, the days move at a slower pace, aided by the silence which seems to encroach on everything and everyone, so that you might find yourself whispering… Visit the caves which dot the coast and drink in the almost exotic feel of this little, big bay. 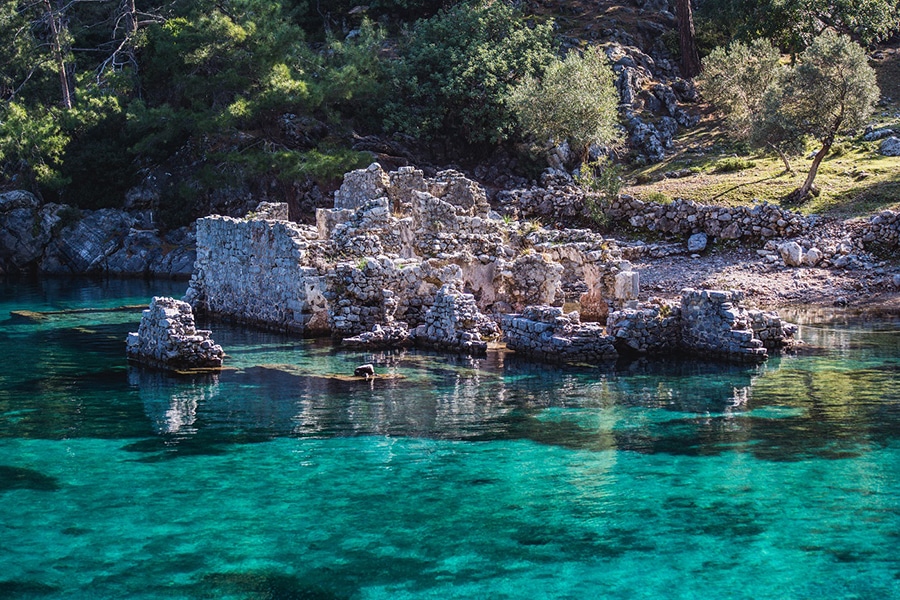 Locals claim that the half-submerged ruins greeting you at the bay formed the bathhouse of famed Cleopatra. They are more likely to be remnants from a Byzantine monastery but we realise this has less of a romantic appeal than saying that Queen Cleopatra once graced the waters with her presence. The backdrop is magnificent, with its pine trees and white sandy beach which, legend has it, was brought by Marc Anthony to prove his love for Cleopatra. 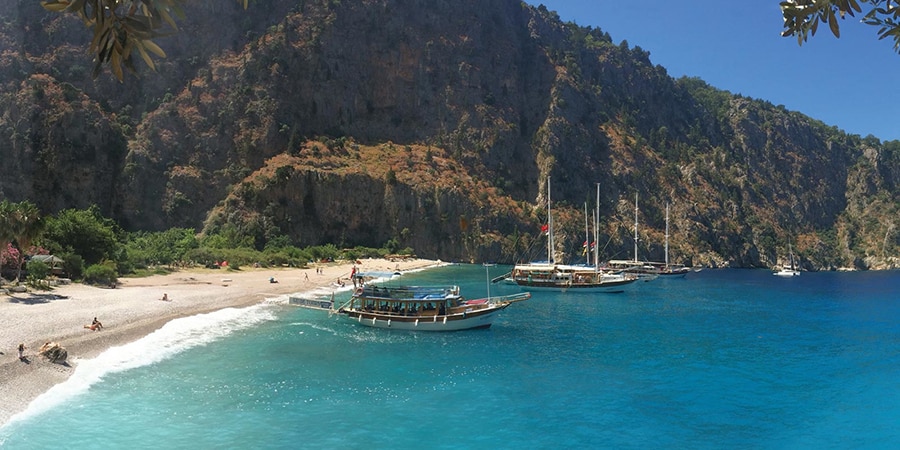 Frequented often by yacht charters, Samanlik Bay is a place where the blue of the sea meets the greenery of the forest in a friendly embrace. Take a deep breath and enjoy a view of the land unspoiled by man’s presence. 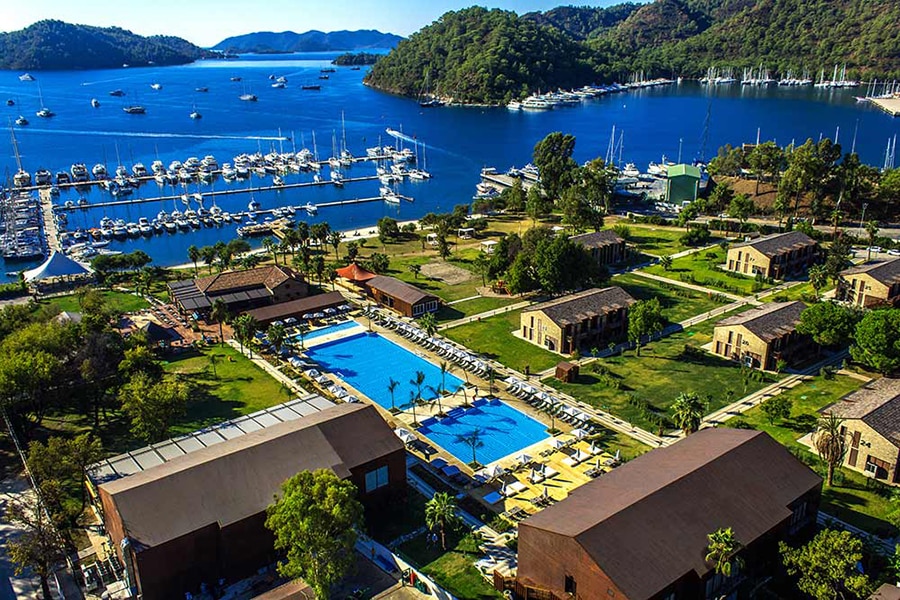 Göcek, or Kalimche, as it was known in the past is our next stop. Situated close to Fethiye, Göcek has much to offer its visitors, who will lack for nothing during their stay there. While the scenery is enough to take your breath away, the many coves and islands ripe for discovery add a certain thrill to the visit. It is known as one of the most beautiful yachting stops in Turkey and a carefully conserved place: no high-rise buildings can be built, to contain its growth and to help keep its present charm which attracts so many sailors worldwide.

Fethiye, the last stop on our itinerary holds a number of gems: you could say we’ve kept the best for last. The beautiful natural harbour protects the bay, making it a haven for sailing yachts and gulets, while the islands scattered like pebbles around it make for some interesting spots to dive in. Fancy something different? Take a trip on land to the ghost town of Kayaköy and see the ruins left behind of an entire population following a mass exodus in the 1920s. Its derelict state combines with a sense of peace forgotten, which hangs like a blanket over the entire hillside.

Discovering Turkey with a yacht charter is riveting as much as it is culturally rich. Delve into its blue depths, trek high and low in search of ruins and lost souls and breathe in the salty tang, as your feet dangle, toes brushing the Turquoise Coast.