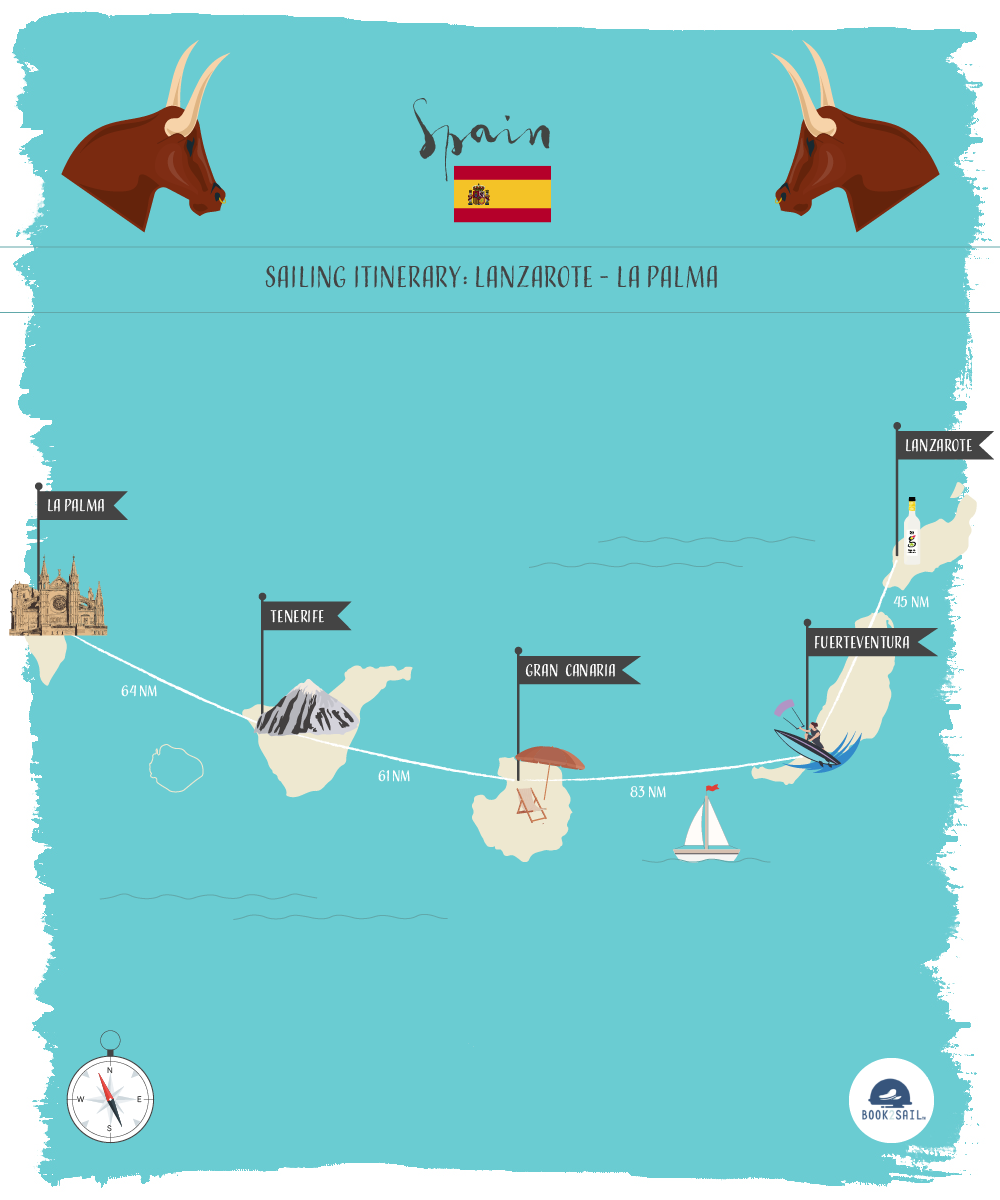 The massively popular island of Lanzarote, the most Northly and Easterly of the seven Canary Islands off the coast of West Africa in the Atlantic Ocean, is renowned for its year-round warm climate. Dubbed the ‘Island of Eternal Spring’, this UNESCO geopark offers an extraordinary landscape, attractive beaches amidst a volcanic and rugged backdrop. The islands environment offers great hiking opportunities amongst other activities, dotted with captivating views and interesting sights, including caves and chasms like Cueva de los Verdes found in Haria, the remnants of lava flows from an eruption around 3,000 years ago from the Volcano Monte Corona. Timanfaya National Park is also worth a visit, comprised in its entirety of volcanic soil, this peculiar area of land is a marvel in and of itself and definitely worth a visit. We recommend visiting Jameos del Agua, distinctive volcanic caves that have been developed to feature a concert hall and restaurant.

The island of Fuerteventura, located 100km off the North African coast, is the second largest of the Canary Island archipelago. As with its neighbour Lanzarote, it is also revered for its year-round warm climate, however with a dash more vibrancy. Admired by holiday goers and water sports enthusiasts alike, the island of Fuerteventura boasts long white sandy beaches complimented by turquoise warm blue waters, offering perfect conditions for diving, of which Fuerteventura offers an abundance of marine life and opportunities to explore. Take some time to discover the expansive areas of golden sand dunes enhanced by the sapphire waters of the sea in the Parque Natural de Corralejo and make sure to pay a visit to the beach of Playa de Cofete in the South of the island for the most remarkable scenery.

Gran Canaria lies 83 nautical miles west of Fuerteventura and is the third largest island in the archipelago. Well known for both its white and black sanded beaches. The island is incredibly appealing due to its variety, it has varied terrain, weather and activities to take advantage of. Although the island enjoys great weather for the majority of the year, the island’s differing landscapes and altitudes contribute to numerous microclimates, which results in an element of unpredictability in some areas, although that may be considered a rather interesting characteristic to experience. From the diverse capital of Las Palmas, to the fascinating Painted Cave in the town of Galdar, the Casa-Museo de Colon documenting the voyages of Christopher Columbus, the stunning scenery and hiking potential and of course, the fantastic beaches, Gran Canaria has it all.

The island of Tenerife is both the most populated and biggest of the Canary Islands and one of Spain’s main tourist destinations. Home to Spain’s loftiest summit (and the highest point in the Atlantic islands above sea level) the dormant volcano, Mt. Teide lays at the centre of the island within the UNESCO world heritage site of the Teide National Park, is an incredibly popular attraction. The many beauties and enticements of Tenerife lay away from the white (and black) sands and turquoise, postcard-worthy beaches and infamous nightlife scene, from imposing volcanic backdrops, bustling markets offering fresh produce, imposing 17th century bell towers and tropical forests are all to be discovered – we recommend checking out the month long carnival of Santa Cruz de Tenerife, held every February and is internationally considered to be second in popularity only to Rio De Janeiro.

The Canary Island of La Palma, the most North-Western if islands laying within the archipelago, is not as known for its beaches as its island siblings, but more than redeems itself in the way of pure untouched nature. Its craggy, sylvan landscape offers some of the most incredibly unique views. The islands national park, Caldera de Taburiente, named after an enormous volcanic crater, is comprised of dense forests of pine, magnificent formations of rock, streams and waterfalls that are a must see, hikers among you, prepare for a fantastic time  – for some breath-taking views, we recommend making your way to Pico Bejenado, standing at 1844m, though the heights of peaks on the island, its segregation affords its guests fantastic viewing. For those looking for history, check out The Sanctuary of the Virgen de las Nieves where you will discover a wealth of stunning history before you.