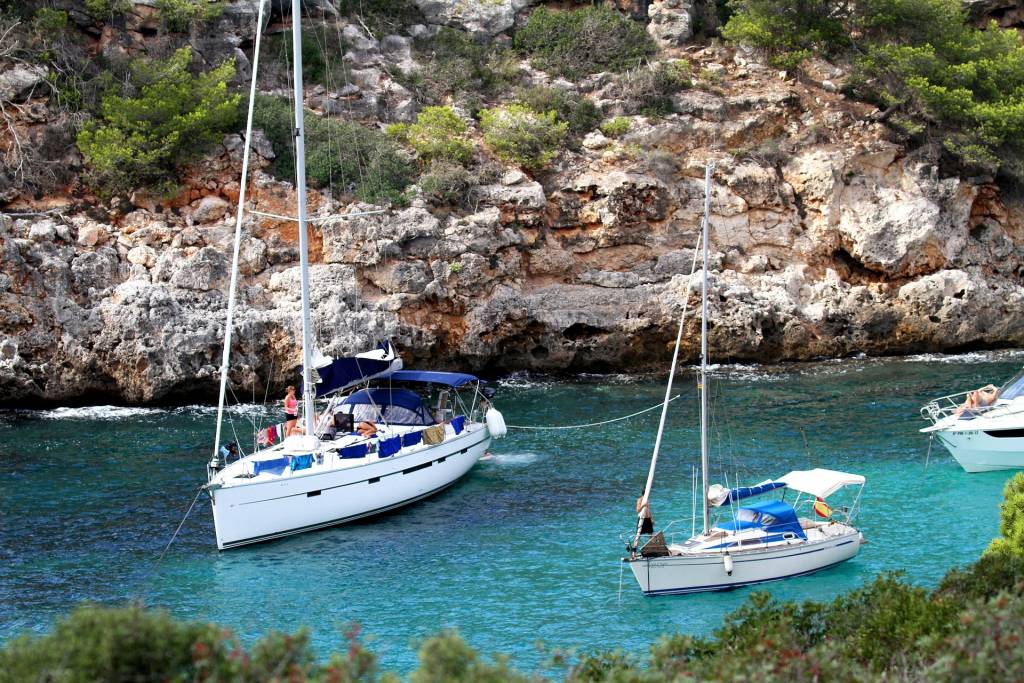 Crete is the largest island in Greece, with a size of 8.336 km², it collects many of the characteristics present in other smaller Greek islands, making it an ideal destination for all types of holidays, rent a yacht to explore the Crete full potential. Besides the wonderful sea of Balos, Falasarna, Elafonissi and other famous beaches in the world, Crete really offers a lot to its visitors: archaeological sites (Knossos, Phaistos, Heraklion), museums and art galleries, entertainment and nightlife (Hersonissos, Malia ), beaches and small islets, spectacular sunsets (Loutro, Matala), charming cities, nature and much more!

The island of Crete was a place conquered from many cultures, and traces of its presence are still evident. It was the land of the Minoans, one of the most advanced peoples in the ancient period, who survived the Mycenaeans only after the great catastrophe of the island of Thira, the current island of Santorini. The famous Minoan palaces, centers of political and economic administration, were so extensive that they appeared as real cities. The most interesting places to visit in Crete are the archaeological sites of Knossos and Festo, the two most visited among the many sites scattered throughout the island.

Among the most important cities to visit in Crete, undoubtedly its capital, the city of Heraklion with a mandatory visit to the Archaeological Museum of Heraklion, one of the most beautiful museums in Greece. Chania and Rethymno are also worth a visit: its historical centers are full of elegant Venetian palaces and fountains, museums and art galleries and many other attractions that should not be missed.

Near the capital of Heraklion is the Palace of Knossos, discovered at the beginning of the last century by the British archaeologist Sir Arthur Evans. His discovery gave more basis to many episodes of the past that were believed to belong only to mythology: King Minos, the Minotaur’s labyrinth and Arianna’s famous thread, although they are fictional stories, the places where they developed were perhaps real.

About 50 km south of Heraklion, along the road to Matala, 2 km away, is the ancient city of Cortina, an ancient city whose founding age is still unknown. Undoubtedly, it flourished when Crete was conquered by the Romans who chose it as the capital of the Roman province of Crete and Cyrenaica. The site is very interesting because within it the laws of Cortina were found, the oldest testimony of the laws introduced.

The second most important Minoan palace in Crete is the archaeological site of Festo, an ancient Minoan city that, according to historians, was ruled by Radamanto, brother of Minos. In this archaeological site, about 10 km from Matala, the famous disc of Festo was unearthed, a mysterious object that is exhibited today in the Archaeological Museum of Heraklion, another place that no lover of history and culture can miss. 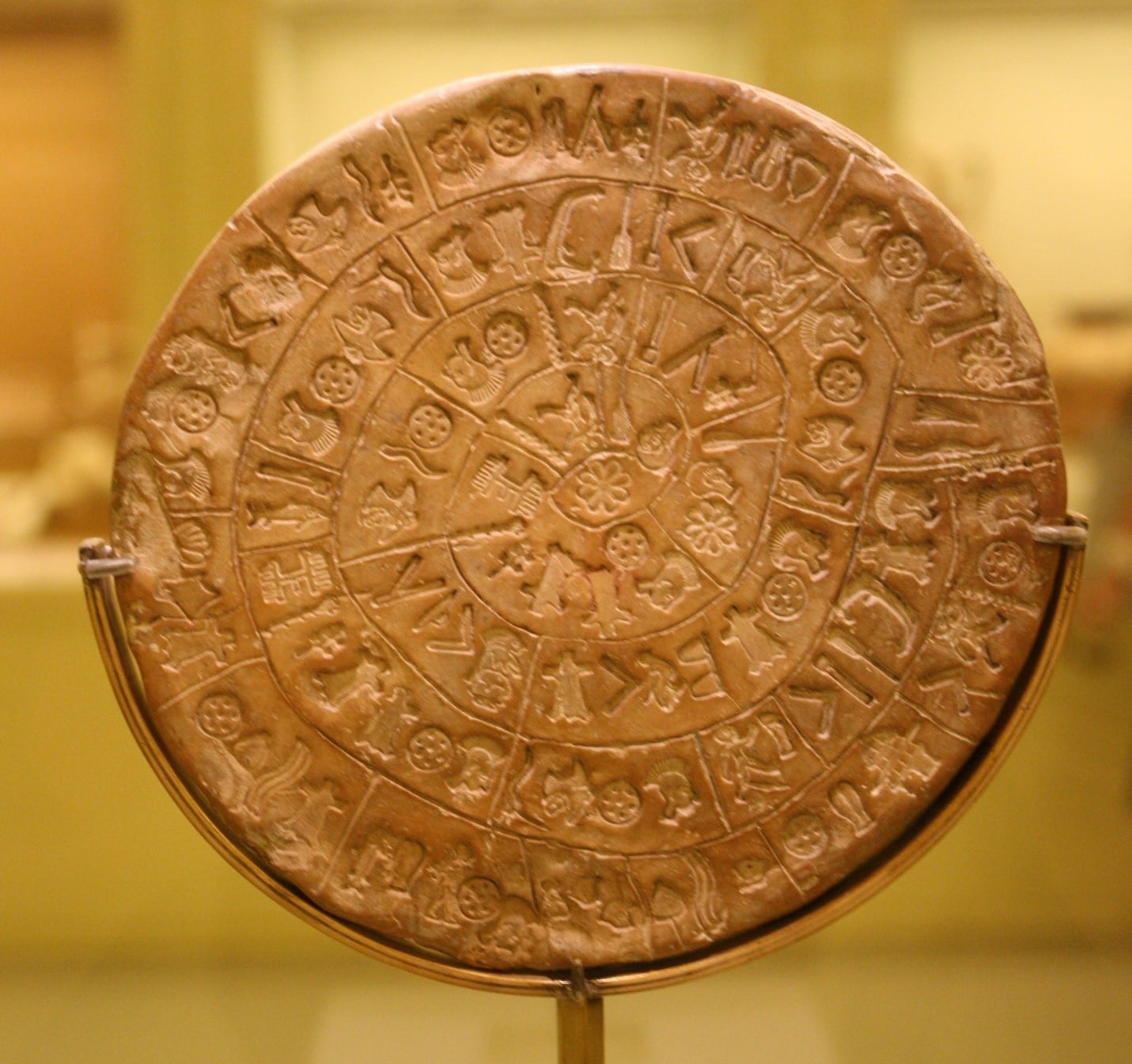 The religiosity of the Cretans is evident by observing the large number of churches and monasteries scattered on the island. Only in the capital of Heraklion, there are dozens of churches of different ages, relevant from a historical and architectural point of view. Many monasteries played a fundamental role in the history of the island of Crete. They were often the last bastions of resistance against the continued domination of the Turks. To visit them means to savor not only the mystical and relaxed atmosphere that is lived in them, but through its history and its architecture, you can relive the history of Crete.

Crete offers many opportunities for nature lovers. The European route E4 is one of the most interesting routes of the European network of trails. Between forests, valleys, rural areas, mountains and canyons, the island is perfect for trekking sessions or relaxing walks in nature.

WHAT TO SEE IN EACH PROVINCE OF THE ISLAND OF CRETE

The island of Crete is so large that it`s divided into four prefectures: Heraklion, Lasithi, Chania, and Rethymno. Due to its size and the general conditions of the roads and means of transport, it is quite difficult to explore Crete in a few days. It would take at least 7 days to see most of its attractions, cities, and beaches. Therefore, it`s good to divide the attractions according to their proximity so that you can organize your trip. 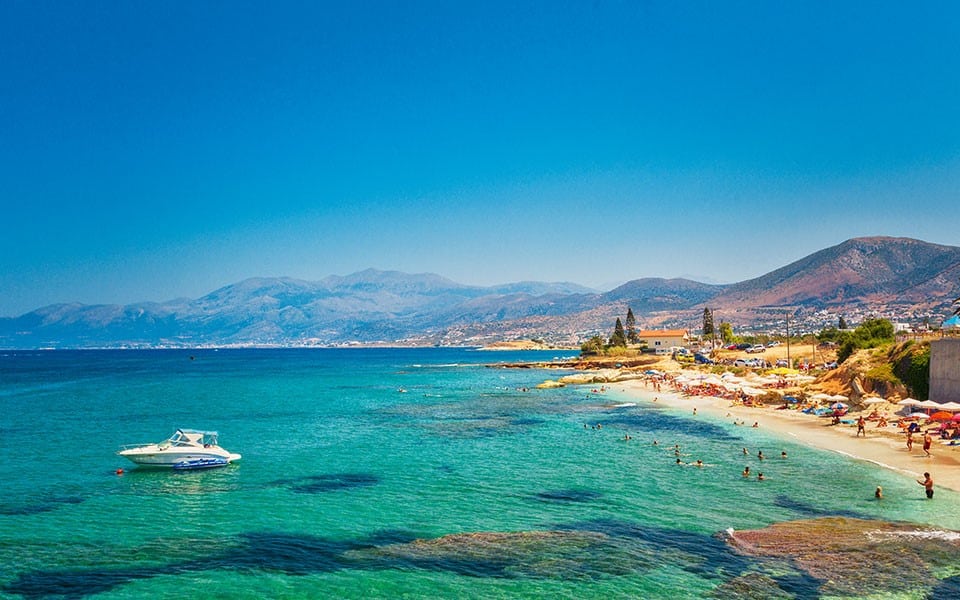 It`s the most touristic province of the island of Crete, where the famous archaeological sites of Crete are located. In addition, the airport of Heraklion, the capital of the island, is the first and main airport, connected with many scheduled and low-cost airlines with the most important European airports.

The Minoan palaces of Knossos and Phaistos:

The Palaces of Knossos and Phaistos are a unique heritage not only of Crete but of all Greece and the world.

The archaeological site of Gortyna:

Gortyna was the capital of the Roman province that included Crete, a historic place with incredible charm. Among statues, Roman buildings and Christian basilicas, it offers a very interesting itinerary.

Heraklion, the capital of Crete, is a frantic city, with a lot of movement, typical of coastal cities. We recommend a walk around the Venetian harbor area and the downtown streets that will make you discover several interesting monuments, besides being ideal for those who want to go shopping.

The Archaeological Museum of Heraklion:

The Archaeological Museum of Heraklion hosts a large number of finds from the archaeological sites of the island. Among these masterpieces, such as the disc of Festo and the goddess of snakes.

Matala is a beautiful coastal town on the south, known for the hippie atmosphere that made it famous around the world a few decades ago. You will be able to admire one of the most beautiful sunsets on the island of Crete. 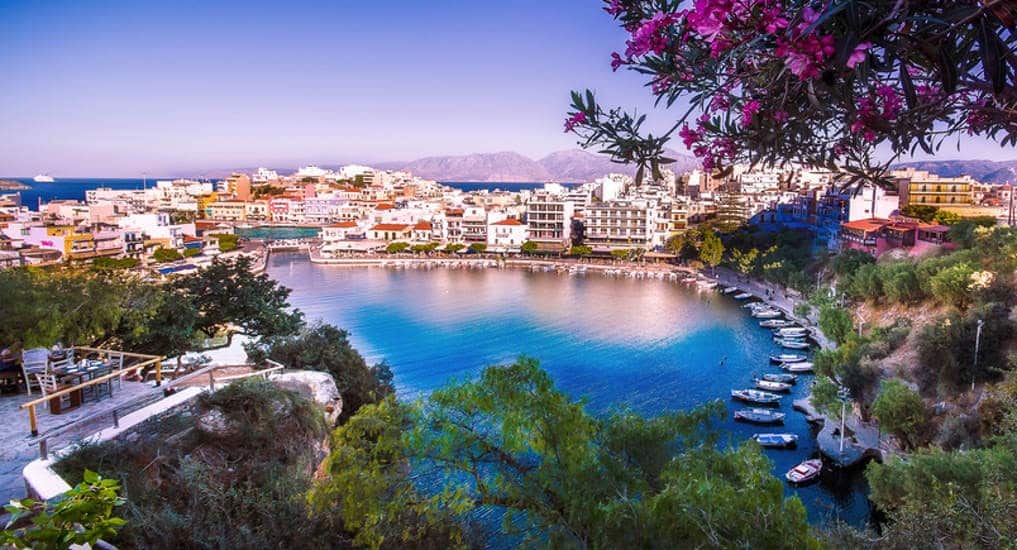 Lasithi is the easternmost province of Crete and the only one that does not take its name from its capital, Agios Nikolaos. In this region, tourism has developed a lot, among the main attractions to visit:

It is a quite tourist city, with many visitors especially after sunset, it becomes alive and pleasant when the taverns and bars are full: and its mundane nights are among the most beautiful in Crete. 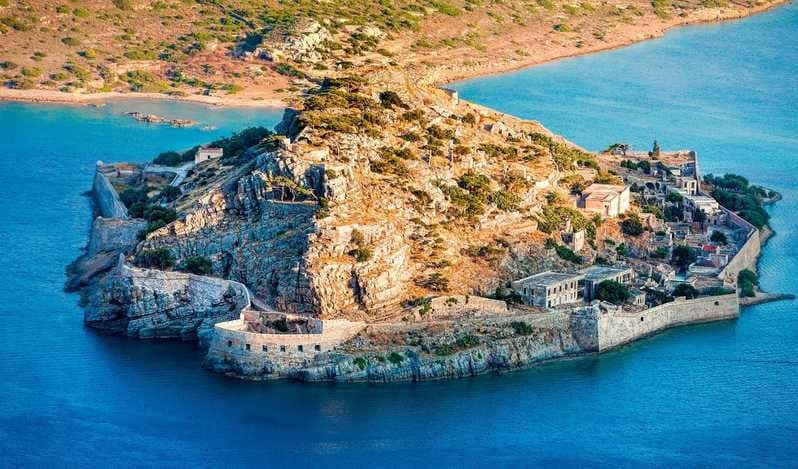 This small island was fortified by the Venetians and later became a colony of leprosy still retains the charm of the Serenissima. Every day, many ships make daily excursions from Plaka, Elounda and Agios Nikolaos.

Panagia Kera on the outskirts of the village of Kritsa is one of the most interesting churches in Crete. Simple and austere, it hides inside some wonderful Byzantine frescoes, one of the most beautiful on the island.

Sitia has a lively historic center both during the day and night and houses an interesting archaeological museum that preserves an authentic masterpiece of Minoan art, the Palaikastro Kouros. In addition, it is a good place to stay and visit the beautiful beaches of the east coast.

The Toplou Monastery is one of the most important monasteries of Crete for its historical value and religious significance. Within its walls, as powerful as those of a fortified castle, breathe a relaxed and mystical air.

The Palace of Kato Zakros:

This Minoan palace is of no less historical significance than the more famous Knossos and Phaistos. Unlike the latter, its structure has not been altered so that this type of Minoan settlements can be better appreciated.

Chania is one of the most beautiful cities of Crete and one of the most beautiful in Greece. Its historic center stretches around the Venetian harbor showing a Venetian structure adorned with architectural elements from the Middle East. Thanks to the Chania International Airport and a large number of low-cost flights, the Chania is one of the best cities to sleep in if you arrive in Crete by plane. Among the main attractions to visit in the area: 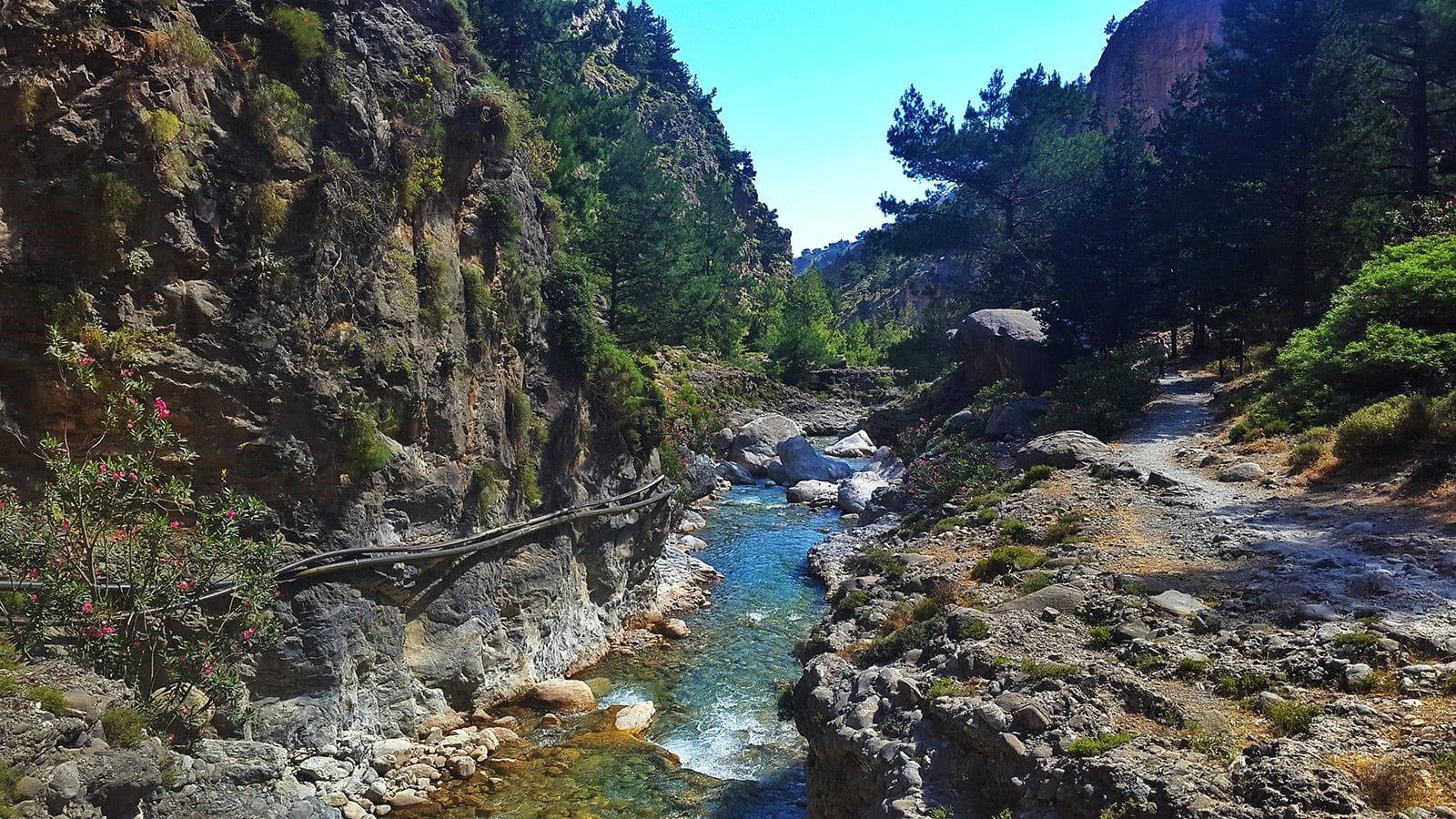 Is the second longest canyon in Europe and certainly one of the most interesting excursions to do in Crete. It is an itinerary in nature that can also be traveled by non-experts: it is a unique experience to be in contact with nature and the animals that inhabit the island.

There are few more romantic and relaxing places in the world than this small coastal town, which can only be reached by boat or by a long path in the mountains. There are no roads, but only a few taverns, hotels, a couple of businesses and a dreamy sea.

A castle in excellent condition around which mysterious stories circulate. Even its position is strange: if fortified structures are usually built in areas of difficult access, Frangokastello is located a few dozen meters from the sea.

This idyllic lake is a perfect place to spend a relaxing day swimming or eating in one of the taverns a few meters from the shore.

The area of Rethymno is one of the least visited areas of the island of Crete. The areas of the interior and the south coast offer many places to visit: 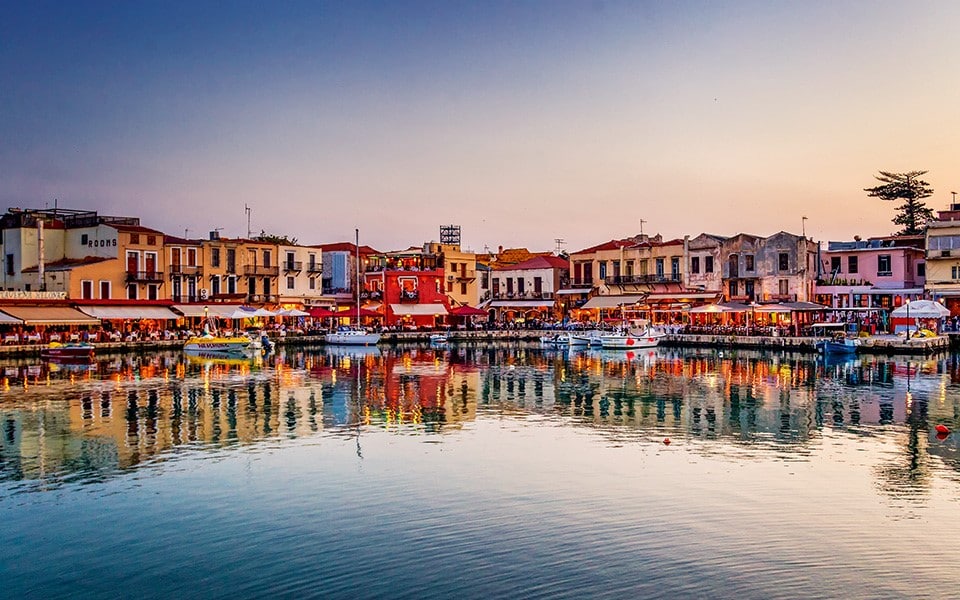 It is a city that oozes history and culture. The Venetian architecture, revisited during the Turkish occupation of the island, is charming. Do not miss walking through its narrow streets and historic center.

It is the most important monastery in Crete, the protagonist of one of the most tragic pages in the history of the island. It`s a place full of atmosphere and symbol of the Cretan community.

Beyond the high religious value, this monastery is a tangible sign of how the monasteries of Crete were the protagonists of the resistance against the Arab invaders.

This quiet village is located at the foot of the high Creta mountains indicated if you want to spend a few hours walking through its narrow streets or sitting at the table of a bar or a tavern to enjoy moments of pure relaxation.

located on the slopes of Mount Psiloritis is one of the most traditional villages of Crete. Its inhabitants, producers of excellent carpets and tapestries, speak a dialect that also includes some ancient Greek terms.