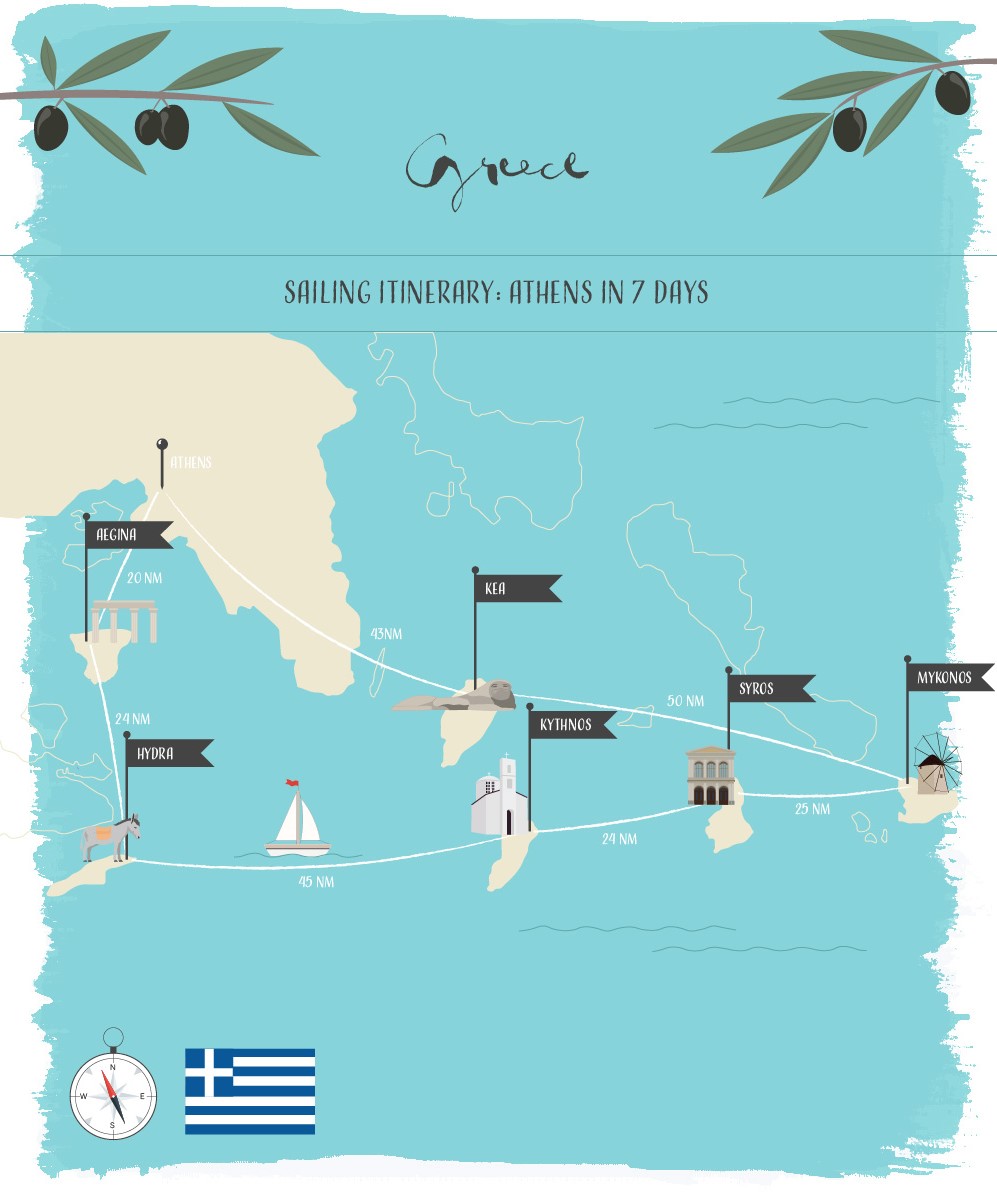 The port city of Pireas (Piraeus) is a short journey from Athens, the capital city of Greece and one of the world’s oldest cities, where you may like to begin your trip. Aegina is one of the Saronic Islands, once a competitor to Athens in a bygone era, this stunning Greek island is laden with ancient relics and being in such close proximity to Athens, is popular with both tourists and Athenians alike. Offering both sandy and pebbled shores, Aegina is home to areas of pinewood to the North, olive and most notably pistachio groves in the West and offers a plethora of must-see archaeological sites, including the magnificent Doric Temple of Aphaia and the Temple of Apollo in town of Kolona to the West.  Both Aegina harbour and the smaller harbour of Souvala in the North offer great stop over areas to anchor.

The Greek island of Hydra is renowned for its picturesque beauty. Located approximately 24 nautical miles from the island of Aegina. Known in ancient times as Hydrea in reference to the islands natural springs, your second stop is an island free from motor vehicles, with the main mode of transport whilst on land being mules and donkeys, of which there are over a thousand, adding quite a unique feature to this otherwise incredibly romantic destination. The town is itself offers cobbled streets quaint cobbled streets meandering between its aged, intriguing buildings. The island itself boasts an abundance of churches and monasteries, of which the Monastery of the Assumption of Virgin Mary is a must see.

The Island of Kythnos is located South of Kea and North of Serifos in the Western Cyclades. This naturally stunning island is less developed than most of its better-known neighbours, having recently begun to make more of a move towards attracting more tourists. The island of Kythnos offers numerous beaches, many of which remain inaccessible by road, which the favourite being the doubled bay of Kolona.     The monastery of Panagia Kanala is one of the islands main tourist attractions, offering fantastic views. We recommend paying a visit to the attractive villages of Dripoida and Chora. Kythnos also boasts thermal springs, situated in the beautiful village of Loutra in the North-East of the island, constructed around a natural bay.

Directly East of the Island of Kythns lies one of the smallest, yet most would agree, endearing islands in the Cyclades, the island of Syros. This stunning island, is the capital of the Cyclades archipelago, administratively speaking. The town of Ermoupolis, known for its elegant venetian architecture and sizable port, is where you will find two of the most thought-provoking sites on the island, the Church of Agios Nikolaos and the Church of Resurrection, one Orthodox and the other Catholic. These neighbouring structures were built upon two hills, facing each other in the 1800’s. We recommend having a walk around the town of Ano Syros, which offers some fantastic sea views. For those seeking quieter beaches, this will be a welcome stop.

The Island of Mykonos, renowned for its internationally opulent party atmosphere and dubbed the Ibiza of Greece, though there is far more to this stunning island than its reputation makes apparent. To the West of Mykonos, away from the allure of Super Paradise Beach in the South, lies the charming town of Chora, one of islands most popular attractions after its beaches. Its enchanting maze of narrow cobbled streets adorned with vibrant flowers amplified by the whitewashed houses. Beware the charm of Little Venice, peppered with stunningly tasteful ageing houses perfectly placed a stones throw from the clearest of blue waters.

The Greek island of Kea, known for its serene coastlines and undulating terrain, dotted with oak trees and olive groves, will appeal to those seeking a break from the more busier tourist areas. One of the island’s most famed attraction, is the Stone Lion, known as The Lion of Kea, this eight-meter-long stone chiselled figure, sporting a faint smirk, has quite the story behind it. Other than this iconic feature of ancient times, the Island of Kea offers great hiking opportunities and secluded beaches. We highly recommend paying a visit to the Monastery of Panagia Kastriani in the North.