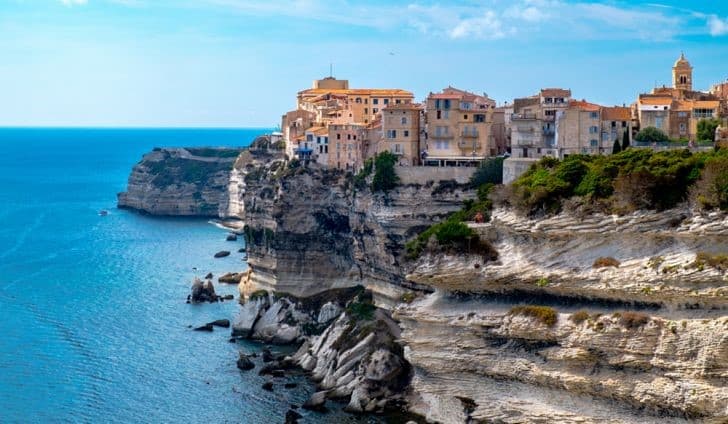 Corsica stands out for its incredible topographical variety in which wild landscapes are combined with plains of intense green color and beautiful mountain lakes. Winding and endless roads take you on a journey through unique natural scenarios that make this Mediterranean island a perfect destination to spend a vacation because of how much you can see. The so-called Island of beauty, one of the thirteen regions that, together with the overseas territories form the French Republic, is a true symphony in which nature imposes itself with ease.

Corsica is best to be seen by boat, charter a boat and enjoy the Island of beauty.

Another great place to visit is Croatia, check why?

In Corsica, time sometimes stops to let a herd of goats cross carefree the road or see two neighbors engage in a quiet conversation in the middle of the road without caring that there are cars waiting to pass. Corsica is like that, unique and unrepeatable. In this article, we are going to recommend ten places that you should visit on a trip to this island, a true treasure of France.

Ajaccio, the capital, is a beautiful city located in the heart of one of the most beautiful gulfs in the world. Ajaccio is one of the jewels of Corsica, a town with lively markets and narrow streets with colorful houses.

Here was born one of the most important characters in the history of France, Napoleon Bonaparte, and we find many references to his figure in the city, as the Church of Saint Erasmus, at the foot of the citadel, where he was baptized, or the Bonaparte Museum, on Saint Charles Street, his birthplace.
Summer place for the cream of the nineteenth century, Ajaccio is still a tourist site highly sought after especially for its white sand beaches.

From the center of Ajaccio, you can make a nice excursion on the trail that runs along the coast to the Sanguinaires, an archipelago surrounded by turquoise waters formed by four rocky islands where many birds nest. A good place to contemplate the Sanguinaires is the Pointe de la Parata, crowned by the Genoese tower, and the best time to do it is at sunset as this place gives one of the best sunsets of Corsica. 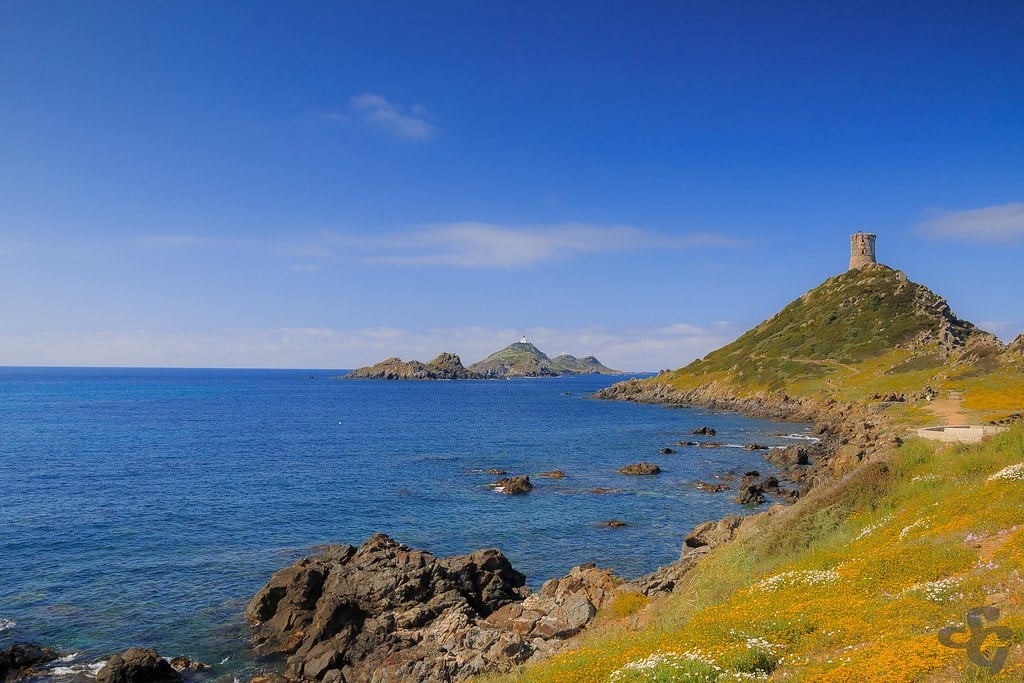 The Great Place of the Sanguinaires Islands and Pointe de la Parata is classified among the Grands Sites of France since 2017. This label is awarded by the Ministry of the Environment to reward the commitment of local stakeholders to the protection and sustainable management of the heritage.

CARGÈSE, A TRIP TO ANCIENT GREECE

Cargèse is one of the most unique villages on the island because it evokes ancient Greece. In fact, many of its inhabitants are descendants of the almost thousand Greeks who escaped in the seventeenth century from Laconia, fleeing from the Ottomans. Testimony of that time are the two churches, one Orthodox, and the other Catholic, located facing each other.

Cargèse is a coastal town and has five beaches of which the Pero stands out.  From there a path leads to the Tour de Cargèse, one of the towers built under the Republic of Genoa between the thirteenth and eighteenth century, and today day is considered a historical monument in France. These towers, which are scattered throughout the Corsican coast, served to protect against pirate attacks. When one was lit, the neighboring constructions also did it and in a very short time, the whole island knew that it had to be alert.

In the town of Piana, with its white houses and magnificent coves, one of the most beautiful landscapes of the island is hidden: the Calanques de Piana. These narrow sea inlets with steep walls with reddish rocks are considered one of the wonders of Corsica. 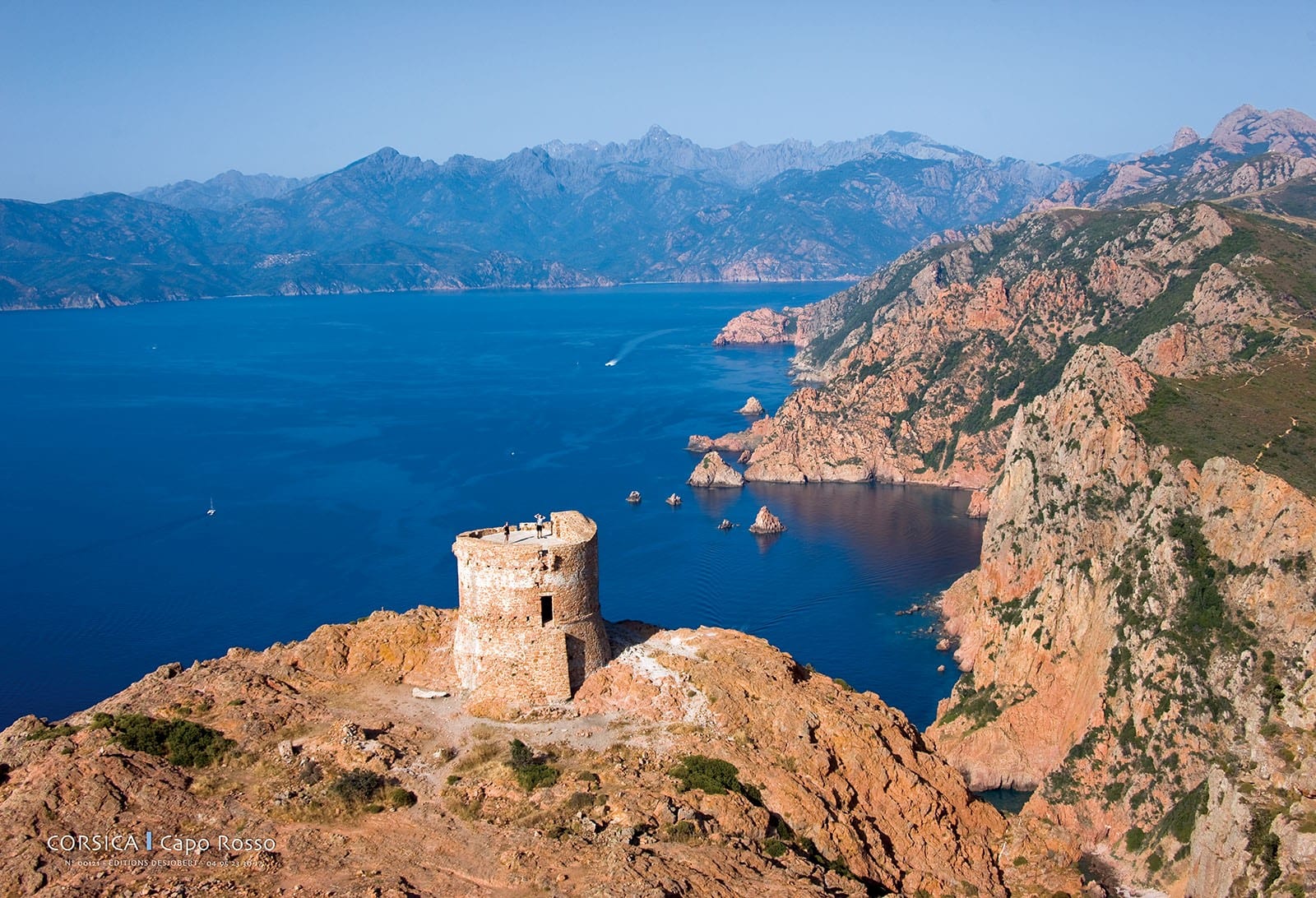 A good way to see them is with a boat trip that starts from the port of Porto and also approaches Capo Rosso, the second most western point of the island. Located in the heart of a site that is listed on the Unesco World Heritage list, it is dominated by the Tower of Turghi, a Genoese building that can be accessed on foot from the port of Orsini.

From Porto, boat trips to the Scandola Nature Reserve, managed by the Regional Natural Park of Corsica and located in the Gulf of Porto, declared a World Heritage Site by Unesco in 1983, also depart. The Scandola Nature Reserve is a biodiversity mecca (home to birds such as the osprey, cormorants and gray shearwaters) and a benchmark in environmental protection: 900 hectares of land and 1,000 hectares of the sea are safeguarded. This treasure of the Corsican nature is only accessible by boat. 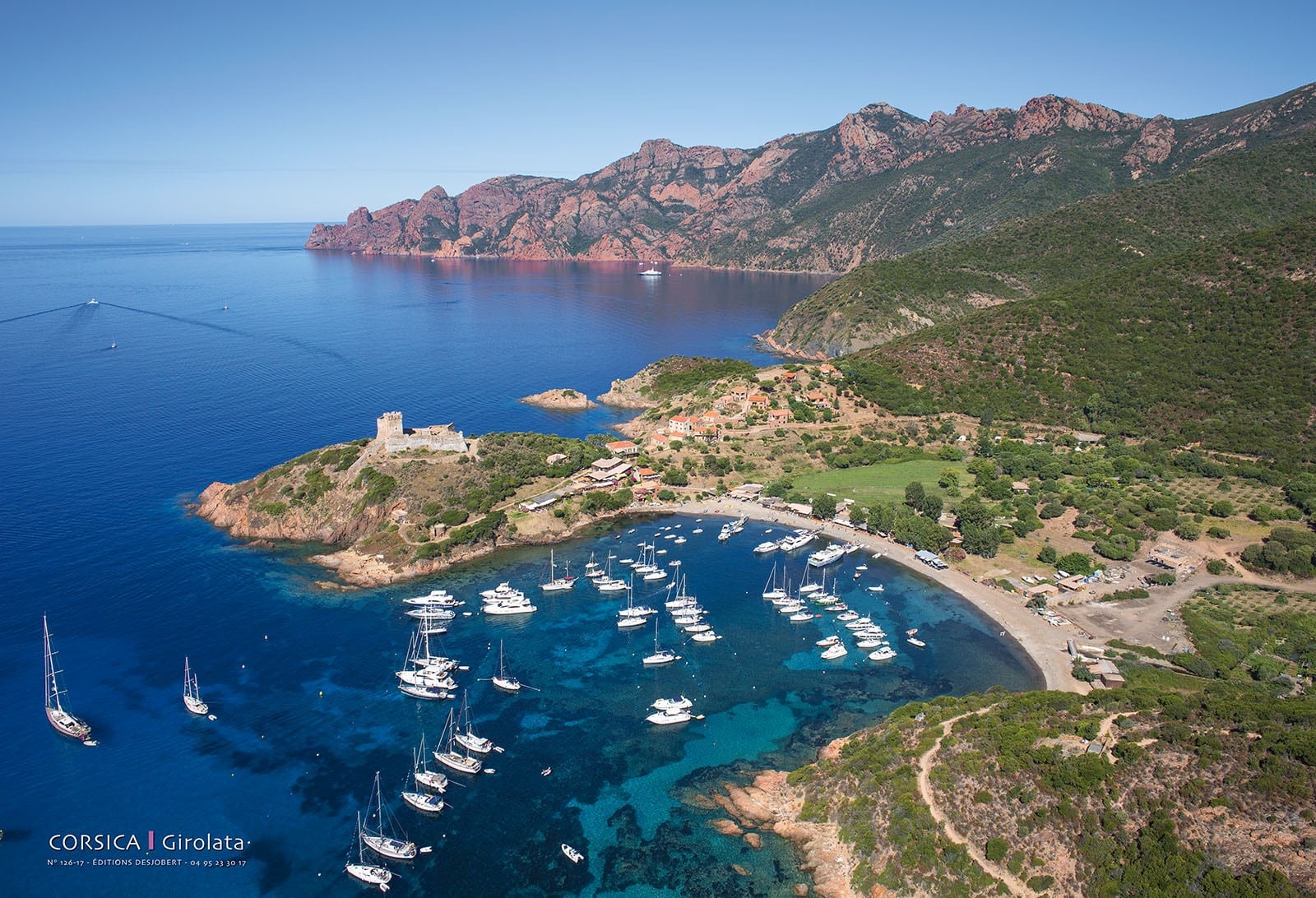 Stop in the small town of Girolata, only accessible on foot or by boat, a miniature replica of the Gulf of Porto that is part of the select club of the most beautiful bays in the world.

The beautiful Calvi is linked to its imposing Genoese citadel that dominates the sea. The baroque cathedral of St. John the Baptist, the church of Église Sainte-Marie de Calvi, the pink color, its old houses, walls, and its lively harbor are some of the most recommended places to see. Its motto is Semper Fidelis for its loyalty to the Genoese republic. It is worth going up to the church of Notre Dame de la Serra, the favorite place of the locals to enjoy an extraordinary view over the bay. 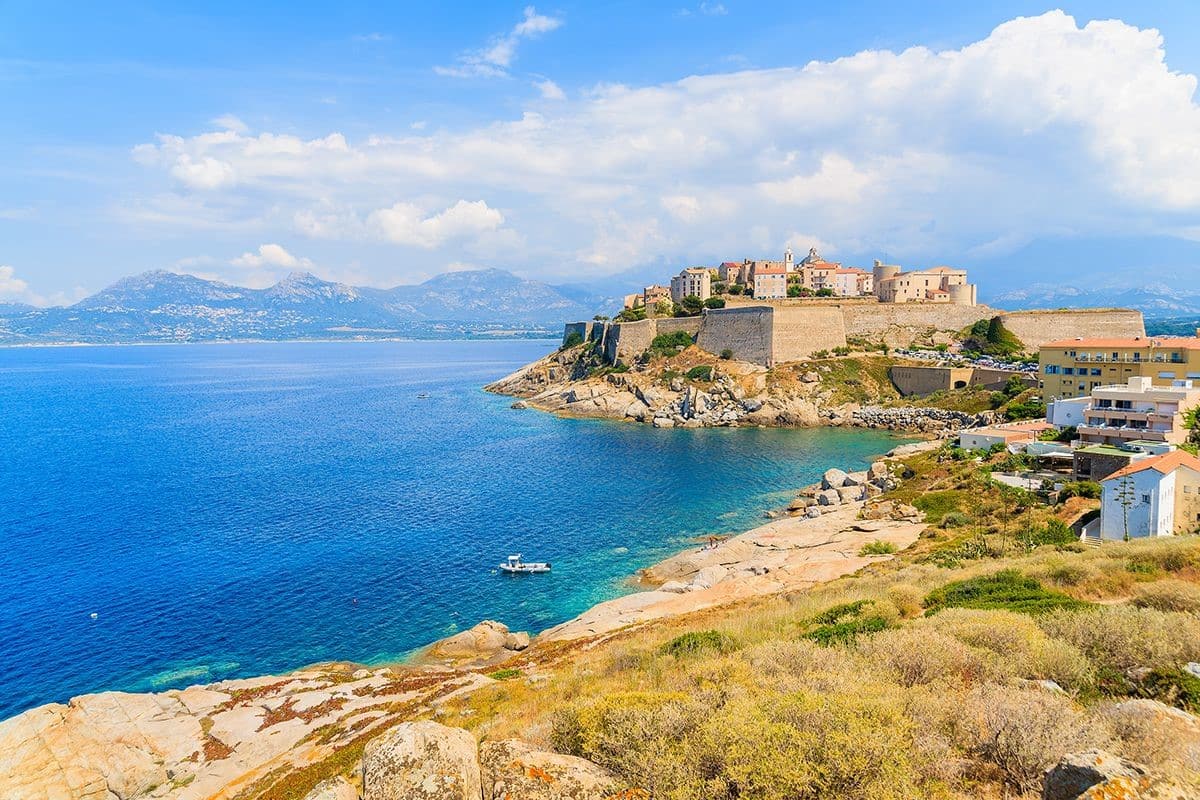 Illustrious characters are linked to Calvi, such as Christopher Columbus since the Colombo family had a house in this town (even some theories suggest that the discoverer could have been born in Calvi) and Napoleon Bonaparte, whose godfather lived in the citadel.

Saint Florent is another town on the north coast of Corsica where it is very pleasant to walk along its quays and enjoy the permanent environment of the recreational port located in the heart of the town.

Walk through the old town, discover the fifteenth-century citadel, visit the cathedral of Santa Maria Assunta or take the aperitif at the Plaza des Portes are some of the recommendations we make of this town that has become the last years in a fashionable tourist place.

The peninsula of Cabo Corso is located in the northeast corner of the island and is one of the most interesting and recommended places to visit. To get to the so-called Corsican finger you have to take the D80 road, famous for its spectacular views, and make several stops in some of the most emblematic towns of the place. 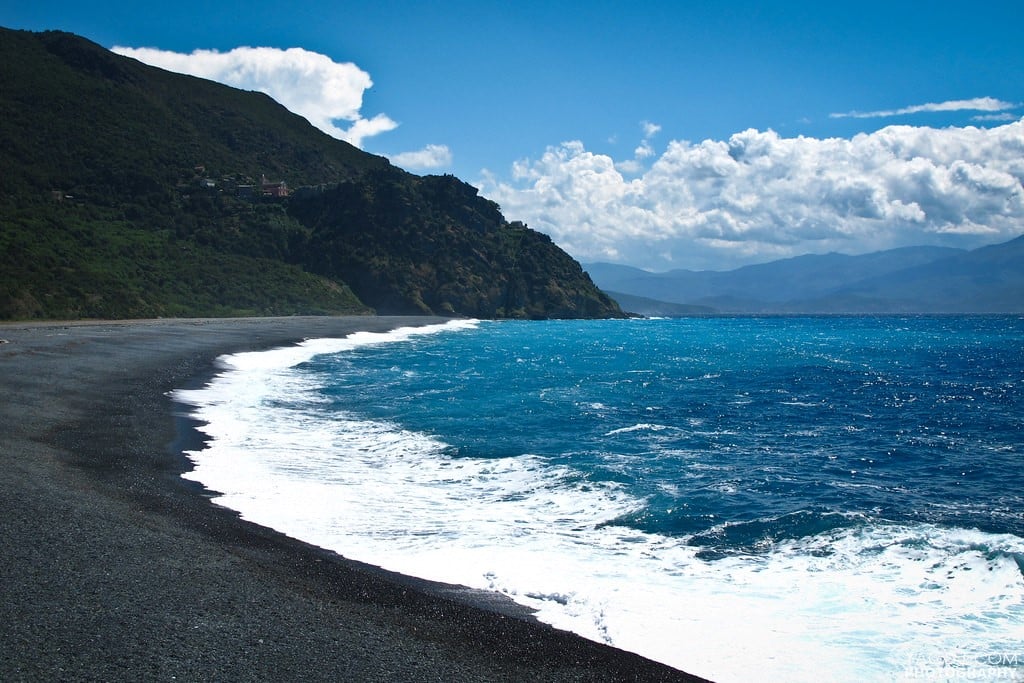 Some of the most interesting is Nonza, with its beach of black sand and its tower worthy of a postcard; the small town of Centuri, noted for its beautiful harbor with crystal clear waters famous for its traditional lobster fishing; Macinaggio, which transports you to a Corsica of another era, authentic and wild; or the picturesque fishing village of Erbalunga, which inspired many painters in the 1930s.

City of Art and History, Bastia is the second most important town in Corsica. It has the charm of ancient Mediterranean cities, with its narrow streets lined by tall houses and a discreet elegance enhanced by its painted shutters. It is a joyful city for which it is very pleasant to walk to contemplate its exalted Baroque heritage. 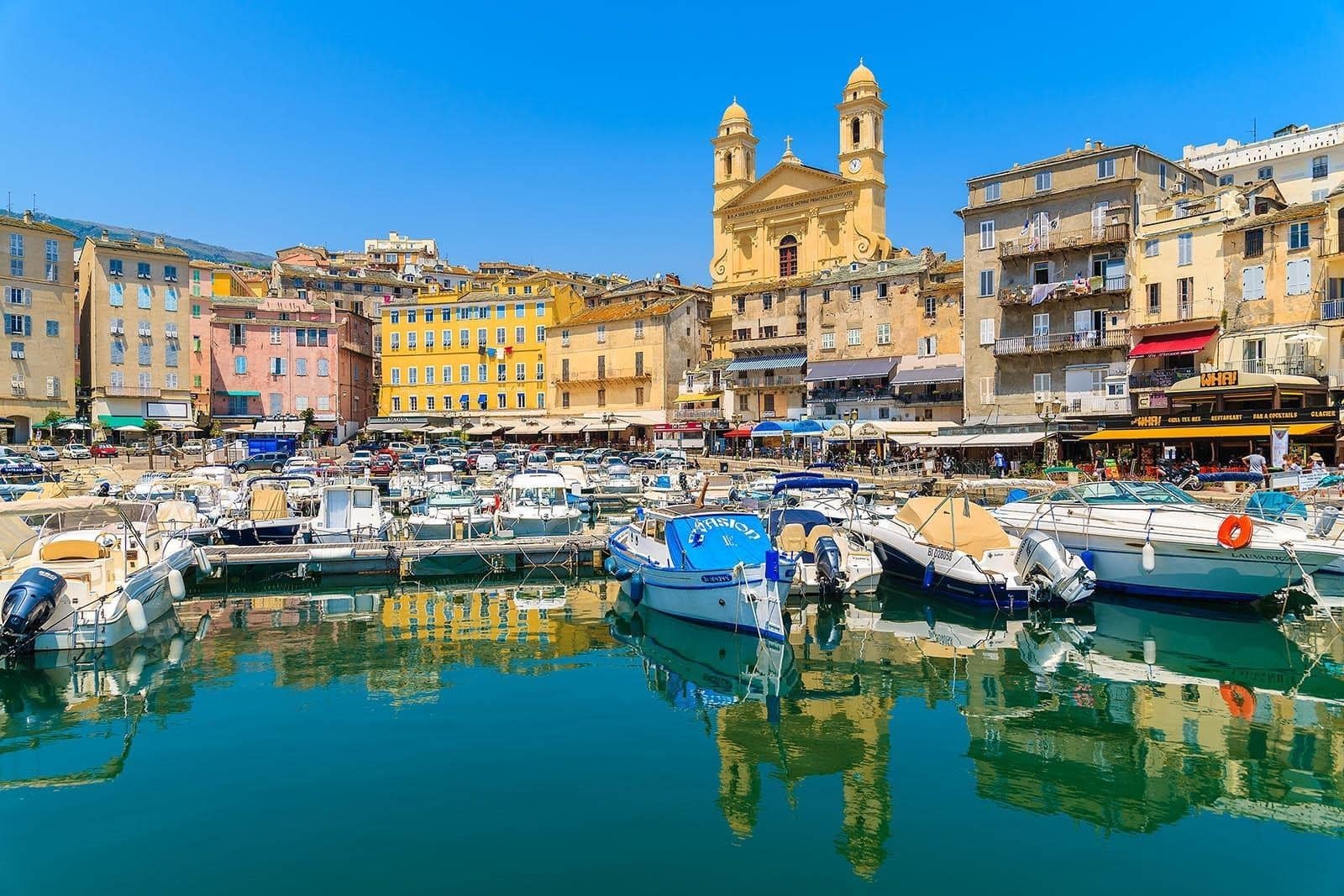 It is worth taking a walk around St. Nicolas, meeting place of the Bastians, the Market Square, always bustling and lively, and its citadel from where you will have a magnificent view of its fishing port. A mandatory stop in Bastia is the LN Mattei, creators of the famous Cap Corse aperitif wine.

A little more than an hour’s drive south of Bastia is Aléria, famous for its Roman archaeological remains, some of which are currently located in the Musée Jérôme Carcopino, where Greek and Etruscan finds are also preserved.

Two of the most striking sites in Aléria are the Diana pond and the Fishermen’s island, a 600-hectare wetland that was also known in Roman times for the oysters grown there.