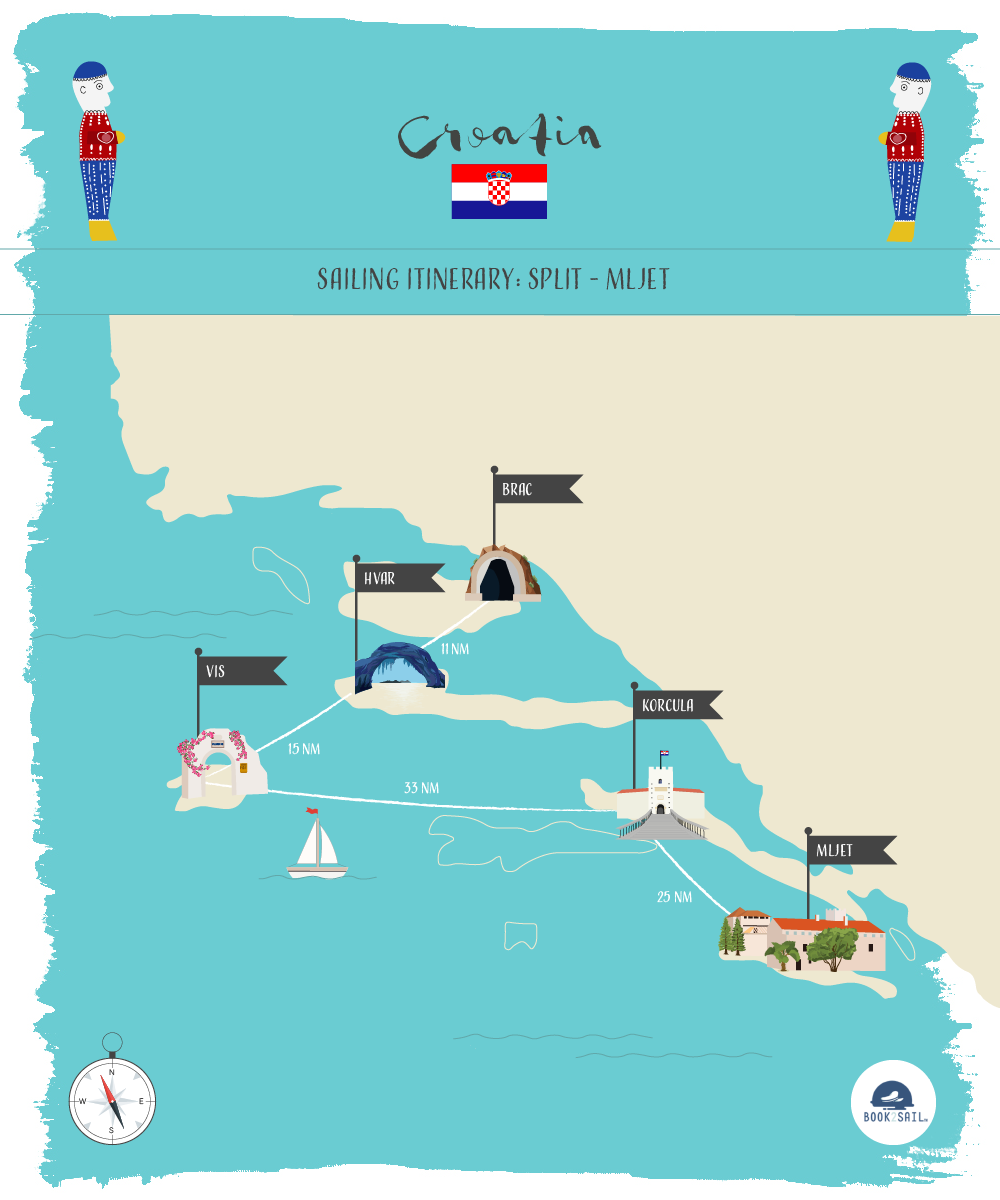 The Croatian island of Brac, one of the largest of the seemingly innumerable islands and islets that grace Croatia’s waters, is probably known best for the stunning white pebbled beach of Zlatni Rat, also known as the Golden Cape. This remarkable sandspit can be found in the Southern part of the island, jutting out into the gloriously blue Adriatic approximately one mile westward from the town of Bol, a must visit for those interested in water sports. The main town, Supetar, can be found on in Northern side of the island along with three other villages. Supetar offers multiple attractions and points of interest including The Parish Church of Mary Annunciation and its surrounding architecture. The district is home to the small pleasant village of Mirca, divided between the hills and closer to the shore, the small quaint village of Skrip, the oldest settlement on the island and lastly Splitska, from which the stones that built the Diocletian Palace in the fourth century originated from.

The illustrious Adriatic island of Hvar is exceedingly attractive, so much so that it has been dubbed the Queen of the Dalmatian islands. The wonderful climate has drawn visitors to its shores for centuries, and not simply for its beauty. This jewel of island, judged by many to be one of the top ten most beautiful in the world, appeals to holidaymakers, scientists and historians alike. Detached from the industriousness of the mainland, the Island of Hvar boasts vineyards, olive groves and vibrant fields of lavender. The islands history dates back to prehistoric times, with decorated ceramics having been discovered in the caves of Markova and Grapceva, an interesting point, it was in the cave of Grapceva, on fragmented pottery, that the oldest representation of a boat in Europe was found. We recommend checking out the Fortress, Foritica (Spanjola) in the town of Hvar, erected at the start of the 16th century during the period of Venetian rule, along with the historic exhibits on display you will find there, you will be treated to the most beautiful panoramic view of both the Pakleni islands and Hvar itself.

The Croatian island of Vis, the furthest of the inhabited islands from the mainland along the historic dalmatian coast, brims with history and untouched beauty. The island was used as a major naval base from 1945 to 1989, this incubatory period from tourism allowed it to sidestep inevitable development and conserve itself, which has now become one of main enticements for visitors. The island of Vis offers tranquil coves, beautiful beaches, great food, and an abundance of history. We recommend taking a look at the secret submarine tunnels, the idyllic Stinivia Cove and Rogacic beach. Vis offers great diving, with some interesting wrecks to explore on the seabed. Lastly, if you have the time, a short distance away, the small island of Bisevo lays to the South-West, in which you will find the Blue Cave. This luminous phenomenon is wonderful to experience and a must see if you are close by in Vis.

The narrow Adriatic island of Korcula is the sixth largest of the Croatian islands. Known for its thick forests of pine, Korcula, dubbed Little Dubrovnik due to its medieval architectural similarities, along with Lumbarda and Vela Luka comprise the main areas. Due to the island’s distance from both Split and Dubrovnik being further than its neighbouring islands of Hvar and Brac, it has not gleaned the same amount of popularity, although this is most definitely a plus. The islands strong cultural is proudly celebrated through traditional celebrations and dances such as the 16th century Moreska Sword Dance, definitely worth a watch. We recommend passing by St. Mark’s Cathedral found in the centre of Korcula and for those primarily concerned with seeking out the best beaches, check out Pupnat and Prizba.

Sitting just over 20 miles from Dubrovnik, the island of Mljet is both the most Southern and Eastern of the bigger Adriatic islands found along the Dalmatian coats. Cloaked in forest, the Western side of this captivating island is a national park. Encompassed within this heavenly setting are the famous saltwater lakes of Veliko Jezero and Malo Jezero and as if their exquisiteness was not enough, located in the middle of Veliko Jezero can be found the St. Mary’s Island (Sveta Marija), on which there is the former 12th century Benedictine Monastery, a fantastic place to spend the day exploring the ruins and gardens. Point of interest, legend has it that the islands of Mljet, is actually the island of Ogygia, the home of the nymph Calypso that kept the Greek hero Odysseus captive for seven years.