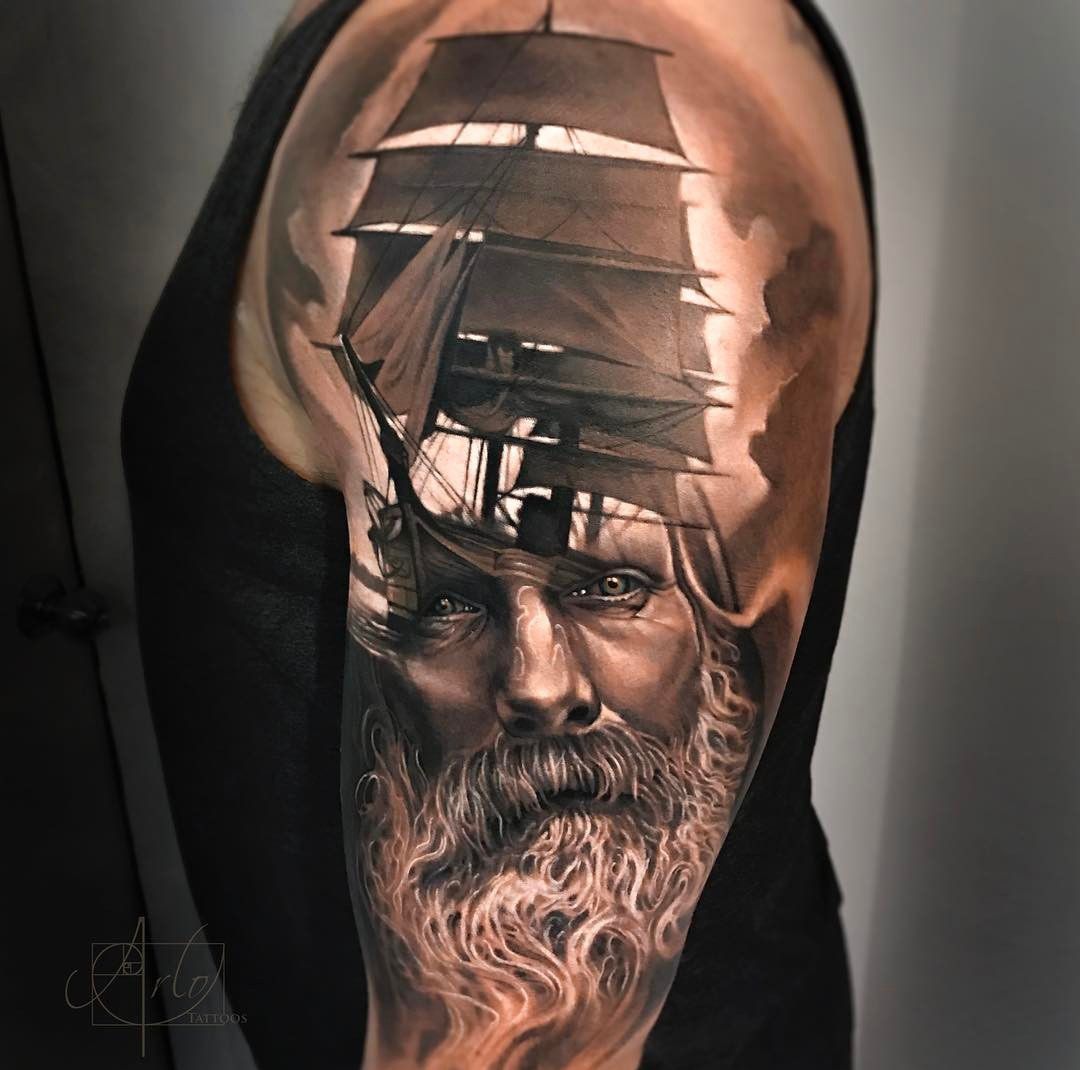 “A smooth sea never made a skilled sailor”

The sea is one of the most dangerous and challenging environments for men and a good metaphor for life. It is not surprising then that the sailors were among the first to be tattooed, so as to ward off dangers and express their sailing experiences, personal and professional milestones. Their weakness for lead tattoos gave rise to strong growth in the art of tattooing, and the designs they favored are still coveted by sailors and non-sailors alike for their old-school beauty or their meaning.

ORIGIN OF THE SAILOR TATTOOS

It`s believed that the origin of the tattoos on European sailors dates back to the 17th century when Captain James Cook and his crew arrived in the South Pacific. They came across the native Maori people, who had long used tattoos for identification or aesthetics, and brought back to Europe these tribal “memories” of the Pacific islands.

In the early 1900s, the United States government decided to put some regulations of tattooing, so they banned everyone with “an explicit” tattoos from joining the Navy. This situation was used by many young men to avoid serving, resulting in a boom in tattoos of nude women.

During the WW2, one of the most prominent names related to tattooing was Norman Collins, better known as Sailor Jerry. Imagine you are a sailor who is spending his last night in Honolulu before leaving for war to defend the interests of your country. It’s time to take advantage of the last few hours, get drunk, try to meet some woman and, of course, you tattoo yourself. Sailor Jerry was the one in charge of the last part. Collins managed to make a name in the history of tattooing. He had been a sailor (hence his nickname) and those motives were an inseparable part of his work: anchors, knots, ships … Usually, small pieces that could be done fast to anyone passing by.

Most nautical tattoos were originally talismans for luck, as the sailors were very superstitious. 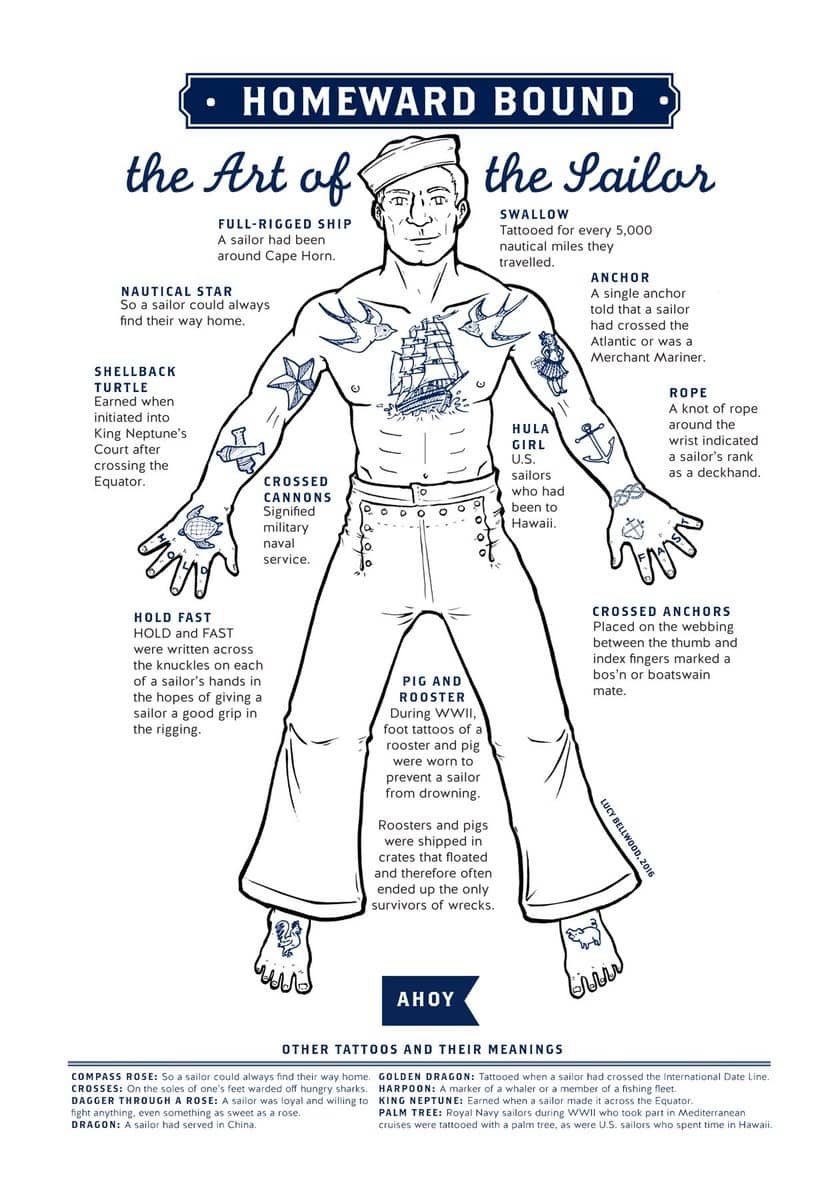 Lucy Bellwood, the tall ship sailor-turned-cartoonist, as she calls herself, did this illustration work for the Vancouver Maritime Museum.

MEANINGS BEHIND THE SAILOR TATTOOS

Here is a list of the meanings behind the most common sailor tattoos.

The anchor is the oldest of marine tattoos, but also the most popular. It represents the link to the earth and has several meanings. The anchor connects the boat to the ground and prevents it from drifting. It is a sign of stability and strength, attachment, and security. Finally, the anchor tattoo was a symbol that was earned and was generally tattooed after the first crossing of the Atlantic. Crossed anchors on the webbing between the thumb and the index finger marked a bos`n or boatswain mate. 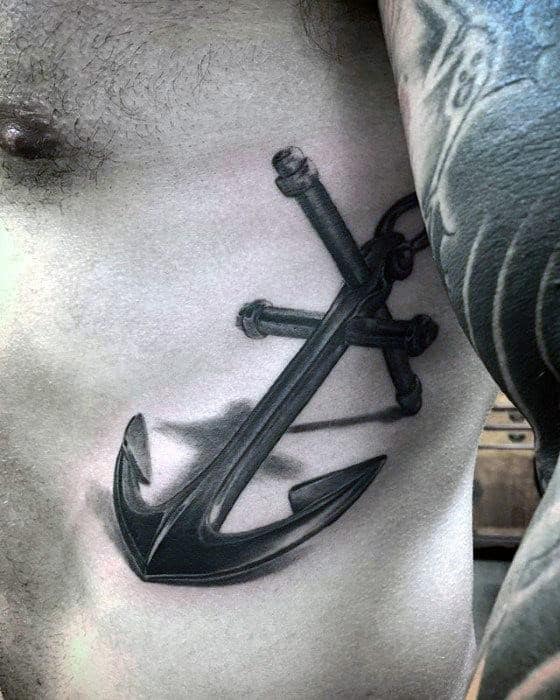 The ship symbolizes the journey and the first discoveries. It is a strong symbol and it was the privilege of sailors who had passed Cape Horn. It represents travel, freedom, adventure, the desire to discover new horizons, unlike the anchor, which materializes attachment and return.
But it also symbolizes another less joyous ideology, that of the disappeared at sea and the danger represented by the latter. This meaning comes from the Viking culture, since going on a sail symbolized departure to war, but also the burial of the dead. 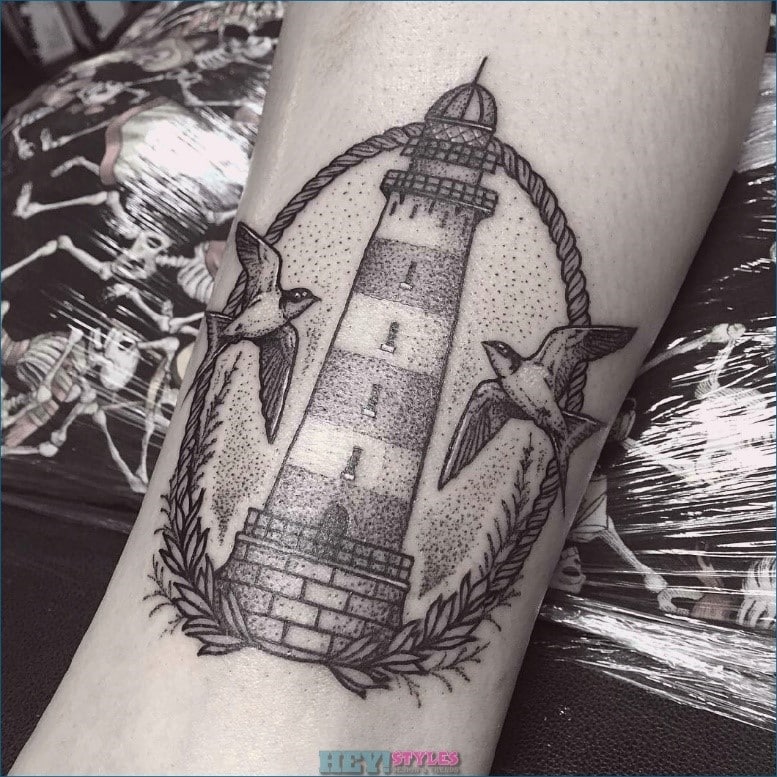 It was the lighthouses that guided the sailors by night, through the seas, to avoid the dangers they represented. Lighthouses symbolize hope. Hope to return safely, to return safe and sound from a long journey to find his family, his family.
In a broader sense, it also marks the commitment one makes to one’s loved ones, no matter how remote, since it symbolizes the return to them. In this sense, it has the same meaning as the tattoo of the swallow. 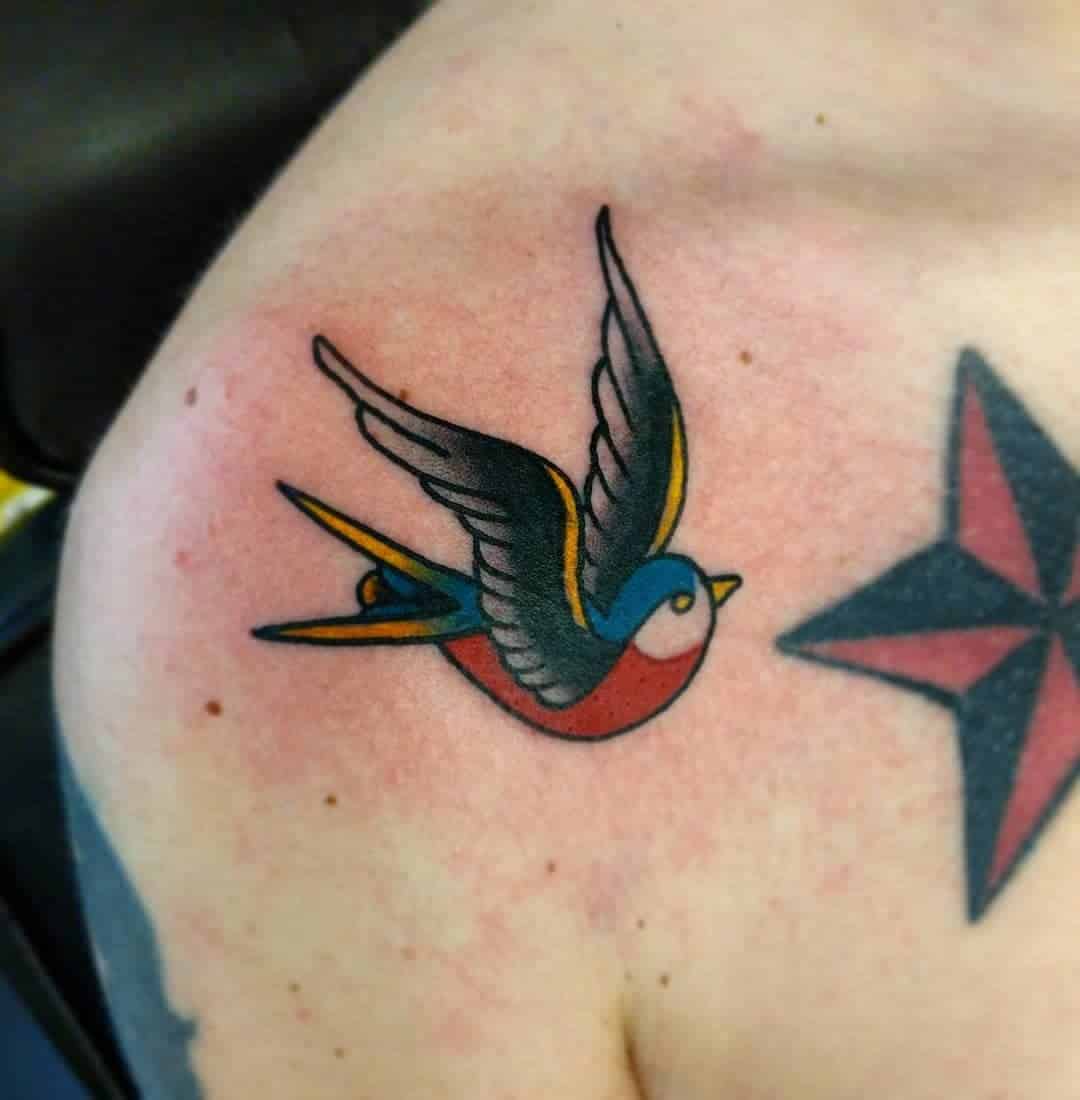 The swallow is the most represented animal on the body of sailors. Symbol of luck, hope, travel, freedom and good news, it has many meanings. Starting with hope (and good news) since the sailors who saw a swallow could be certain that the land was not very far away. Sailors had one tattooed before going to sea, and one when they returned. If they died during their journey, the first swallow was supposed to bring their souls to paradise, so all that is also an idea of ​​protection.

Others explain that sailors had a swallow tattooed after traveling 5,000 miles. A second swallow was drawn once reached the 10,000 miles. 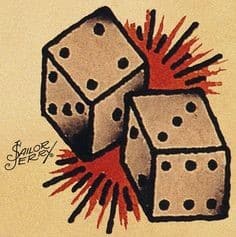 A set of dice was often chosen by a sailor to show that he was a fearless risk taker. It was also chosen by sailors that enjoyed gambling.

A tattoo acquired after the initiation in the Court of King Neptune after having crossed the equator.

A tattoo of crossed cannons represents military service among sailors.

Sailors tattoo the letters of “HOLD FAST” on their knuckles to acknowledge and respect the sea, and in hope of giving a sailor a good grip in the rigging. 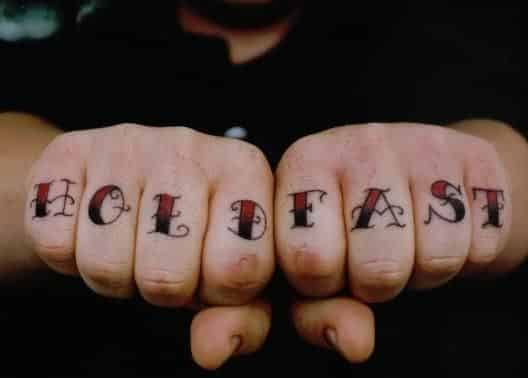 A dragon symbolized that a sailor had been to China.

The song of the siren was a superstition. It was thought that the beautiful lure of a siren’s voice would misguide a ship, and cause it to wreck, or pull a sailor into the sea to find her where he would drown. Having a mermaid tattoo protected against the dangers of the sea. 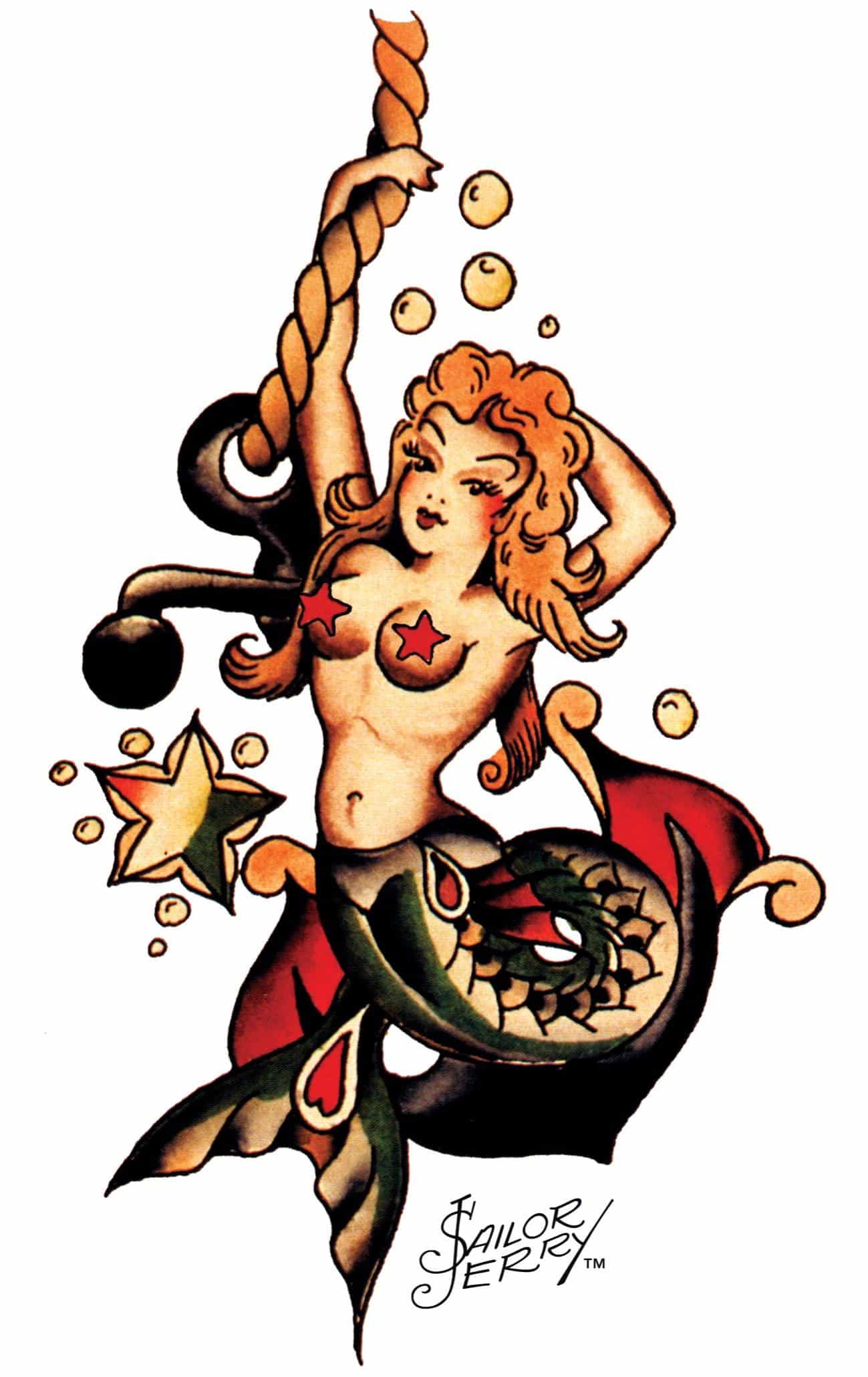 Often sailors wouldn’t see females for months so a pin-up served as a reminder of love left at home, or a sense of female company on an excursion. 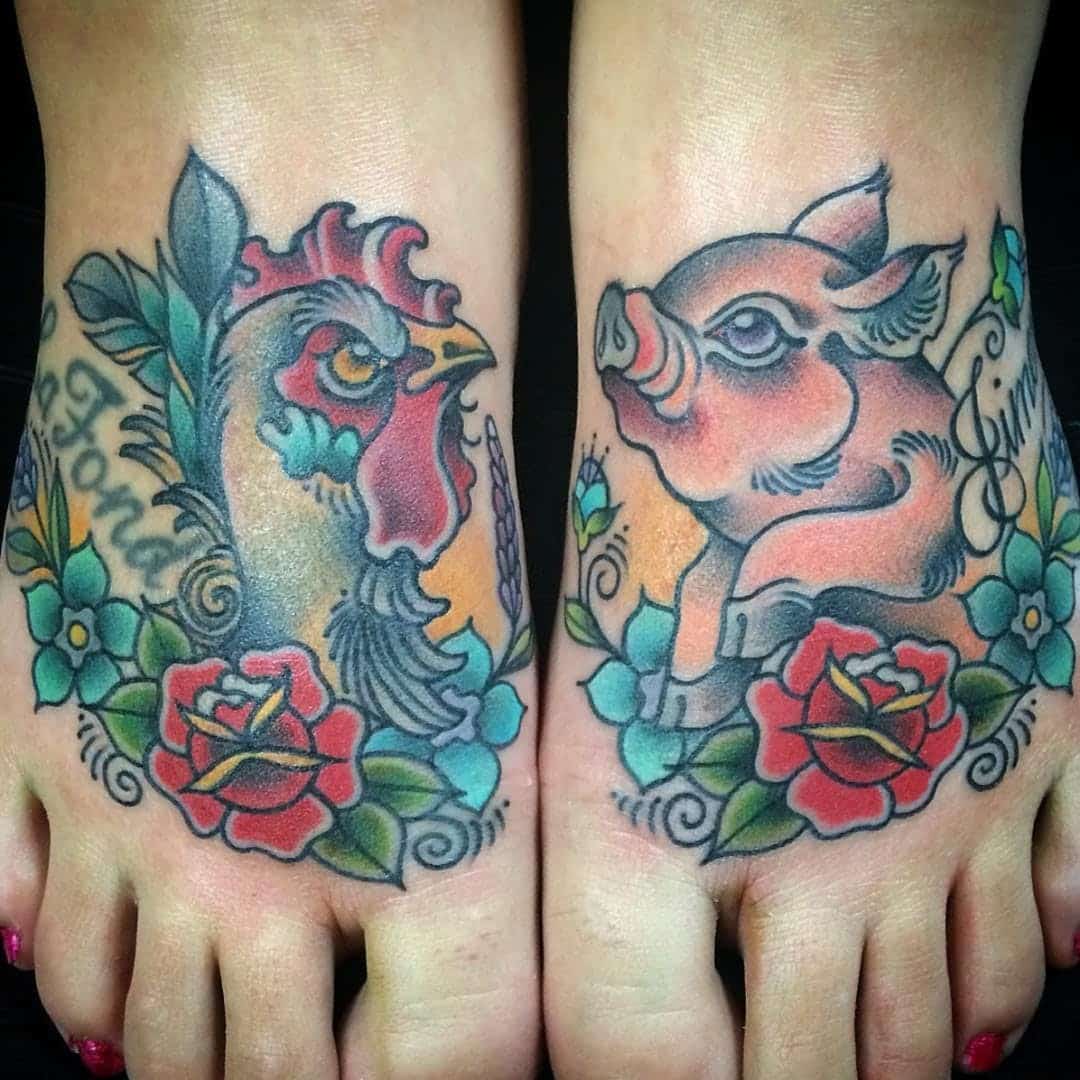 Even though not associated with the sea, these two farm animals were often tattooed on the feet of sailors as good luck against drowning, or on the ones that survived a shipwreck. The rooster on the right side and the pig on the left side. There are several reasons to explain these drawings. The first: these animals were transported in wooden crates, able to float after a shipwreck. An old saying also says: “pig on the knee, safety at sea, cock on the right, never lose a fight.”

Though most of us are not sailors, we still navigate the stormy seas of life, counting distances, marking achievements and defying the odds. To inspire your next tattoo design, consider the meaning and symbolism of sailor and nautical tattoos.