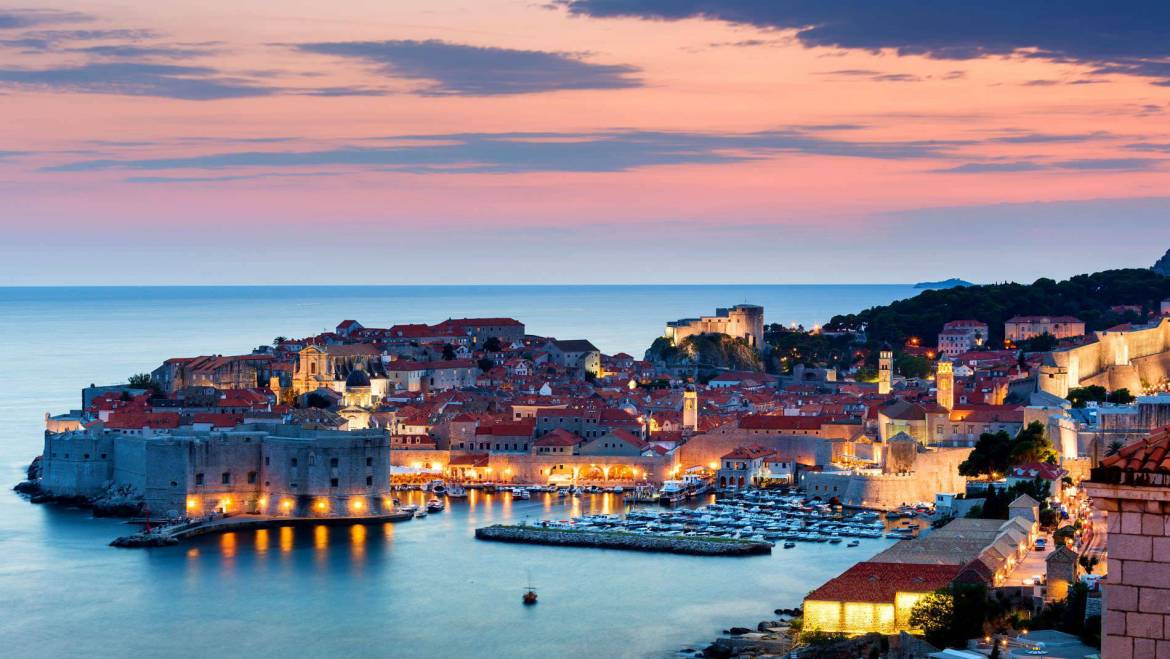 Renting a boat in Split and sailing to Dubrovnik, the pearl of the Adriatic, is one of the best options available to discover the most interesting Dalmatian islands among the thousand scattered off the coasts of Croatia, in the Adriatic Sea. The port of Split is a good starting point to rent a sailboat, a schooner, a catamaran or a yacht – depending on your budget and needs – and enjoy a relaxing and unforgettable nautical vacation. 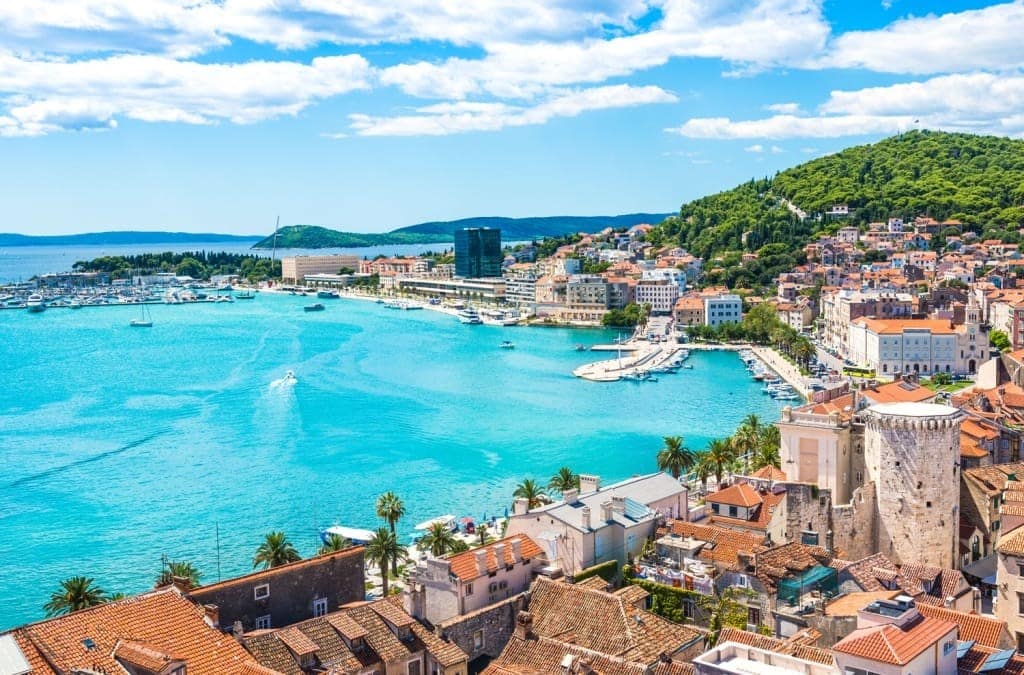 Begin your sailing holidays in the port of Split, one of the most impressive cities for the travelers visiting Croatia. Before embarking you can`t miss a visit to its historic center, declared a World Heritage Site by UNESCO in 1979 or a walk through its lively streets, full of people at all times. 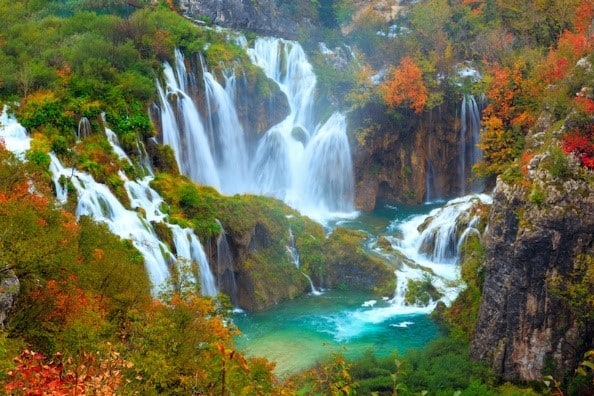 In the first stage of your boat trip, we recommend sailing through fresh waters to discover the Krka River National Park, famous for its seven waterfalls, which originated, just like the Plitvice Lakes, from the sedimentation of the travertine, a special kind of Limestone. The most abundant waterfall is the Large slap, while the Skradinski Buk is the largest and most well-known, as well as being the last on the Krka’s way to the sea. At the gates of the Krka National Park is the village of Skaradin, which has a small port for your sailboat or yacht. From here, you can go to an excursion to the park, located about 4 kilometers away. Do not deprive yourself of a good bath in the waterfalls! To end the day, we recommend you try some fish from the river in a local restaurant.

After the experience of entering the river, return to the Adriatic to discover by boat the National Park of the Kornati Islands. It is an archipelago officially composed of 147 islands and islets, although according to a local legend there are actually 365 islands, as many as the days of the year. In the middle of this labyrinth of islands, you can look for a bay to spend the day and enjoy a quiet bath and a good meal on board your boat. The water here is so clean that you can see the seabed even to a depth of 40 meters! A paradise for scuba divers and spear-fishers.

The Telascica natural park is located on the southern tip of the island of Dugi Otok, (Long Island in English). It is a gulf with a tall vertical ridge on the top of which is a large salt lake called Mir (Peace). If you want to visit the lake, take a buoy and go out to do some hiking. The waters of the lake are two or three degrees warmer than that of the sea, so medicinal properties are attributed to it. Telascica is a perfect place to practice diving due to the richness of marine life. In the afternoon, light a fire, prepare fresh fish on the grill, open a bottle of wine and enjoy the starry night in silence. 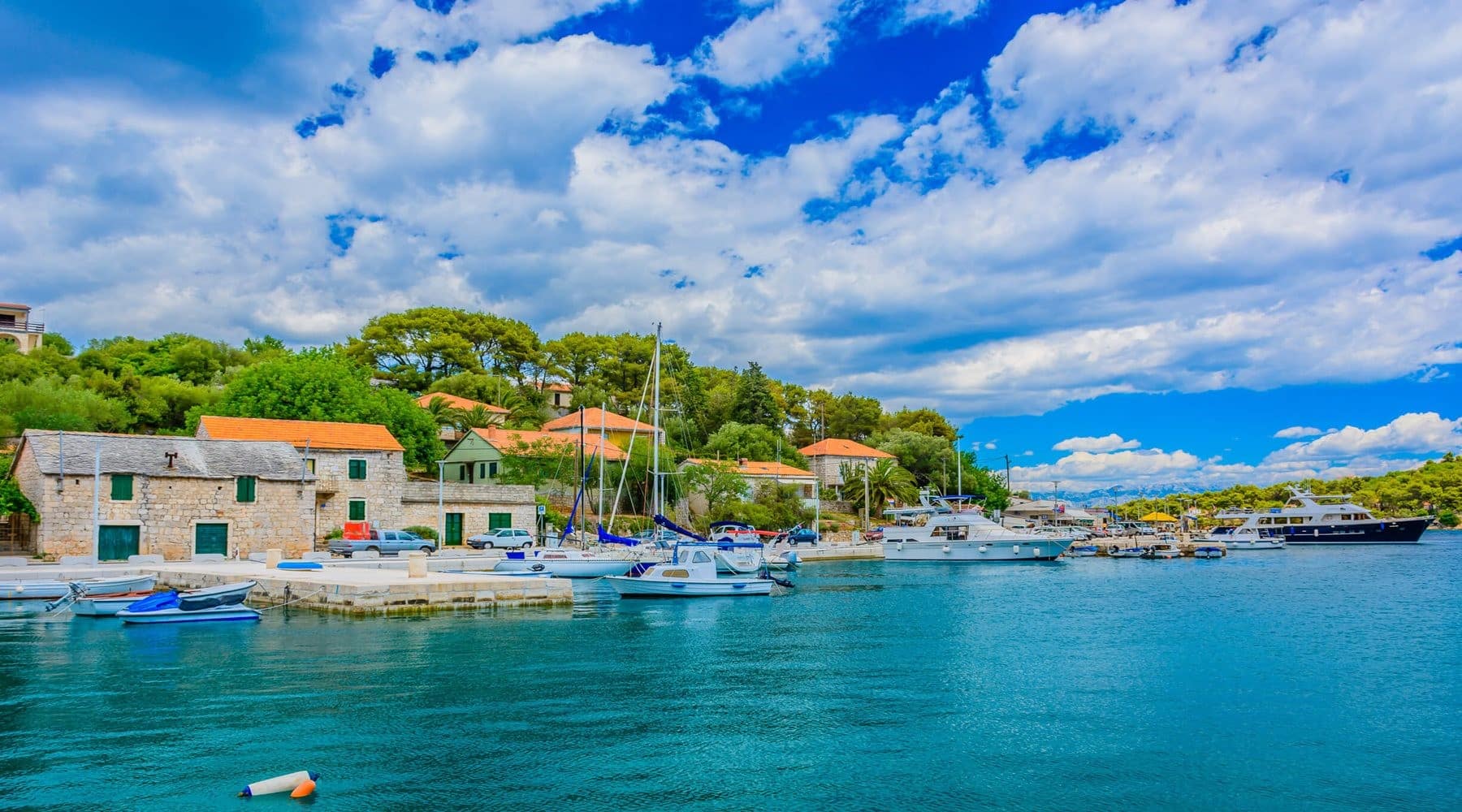 Discovering Solta in a sailboat or catamaran will be a memory for a lifetime. In any of its bays, you can lie down, relax, soak up the fragrances of the Adriatic and be surprised by the food prepared on board. It is the advantage of renting a boat with crew! From Solta, sail to the island of Hvar, specifically to Stari Grad. But before arriving, anchor in a bay called Tiha – “silent” in Croatian – a paradisiacal corner that lives up to its name and where you can continue with your routine of baths, diving, and exquisite food on board.

Stari Grad, which in Croatian means “old city”, is a small town on the island of Hvar surrounded by a landscape of olive trees and vineyards that will surely surprise you pleasantly. It was founded by the Greeks under the name of Pharos and later occupied by Rome. Among the places of interest is the Kastel Tvrdalj, a fortified house built in 1520 by the writer Petar Hektorovic and who continued to preserve the pond where he raised fish. A tip: do not miss a quiet walk along the long promenade that borders the bay.

You are now in the middle of your trip and you`ve probably forgotten about everything that used to cause you stress, but you still have many wonders to discover. Don`t leave the island of Hvar but go to the city with the same name, in the western end of the island. The food will be served on board while you anchor on the island of Scedro and in the afternoon anchor your sailboat or yacht in the port of Hvar, in a quiet bay. The city is famous for its elite tourism and great nightlife, so after dinner, you can have a drink in one of its clubs, such as the Carpe Diem, one of the most popular of the place. 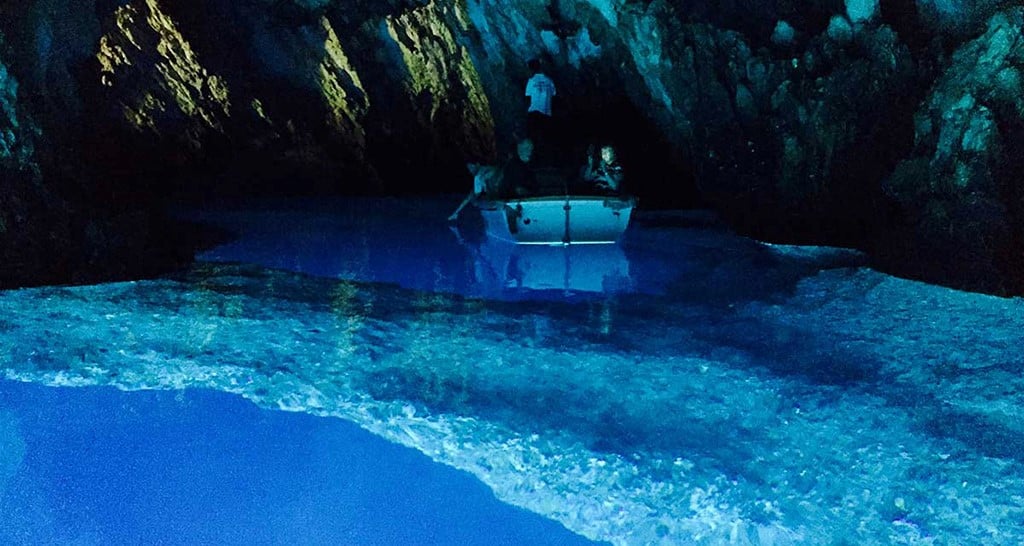 Sailing on the Adriatic allows you to discover gems such as the island of Vis, one of the most remote of the peninsula. It is a place where crowds and large hotel complexes have not yet arrived. The multitude of caves along the coast is one of the main attractions of the island, although the best known, Modra Spilja (Blue Cave) is located on the neighboring island of Bisevo. On the island of Vis, there are natural gravel beaches and the sea is very clean and transparent, ideal for diving, jet skiing, windsurfing, and other nautical activities. 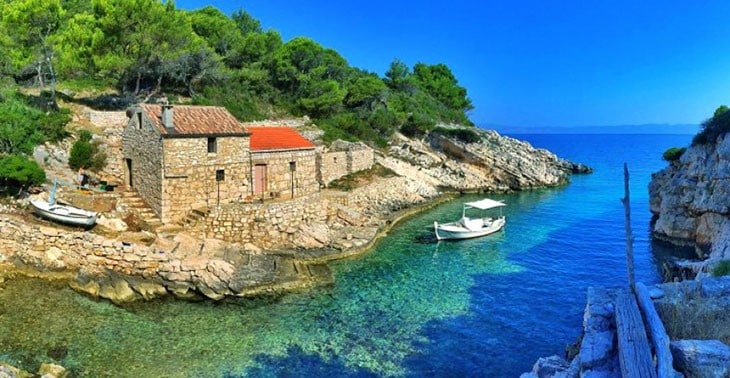 The island of Lastovo is very popular among sailors because of its natural beauty and its tranquility. It’s almost a virgin island! It has a beautiful coastline with coves everywhere, pine forests, cliffs with unspoiled nature and hidden bays, such as Luka. It is an ideal island for lovers of sailing, diving, and spearfishing, but also for lovers of good gastronomy (especially fish and seafood) and exquisite wines, such as the Marastina. The winters in Lastovo are very mild so it is an ideal destination to travel on schooner, yacht or sailboat at any time of the year, even in February, when its famous Carnival takes place. 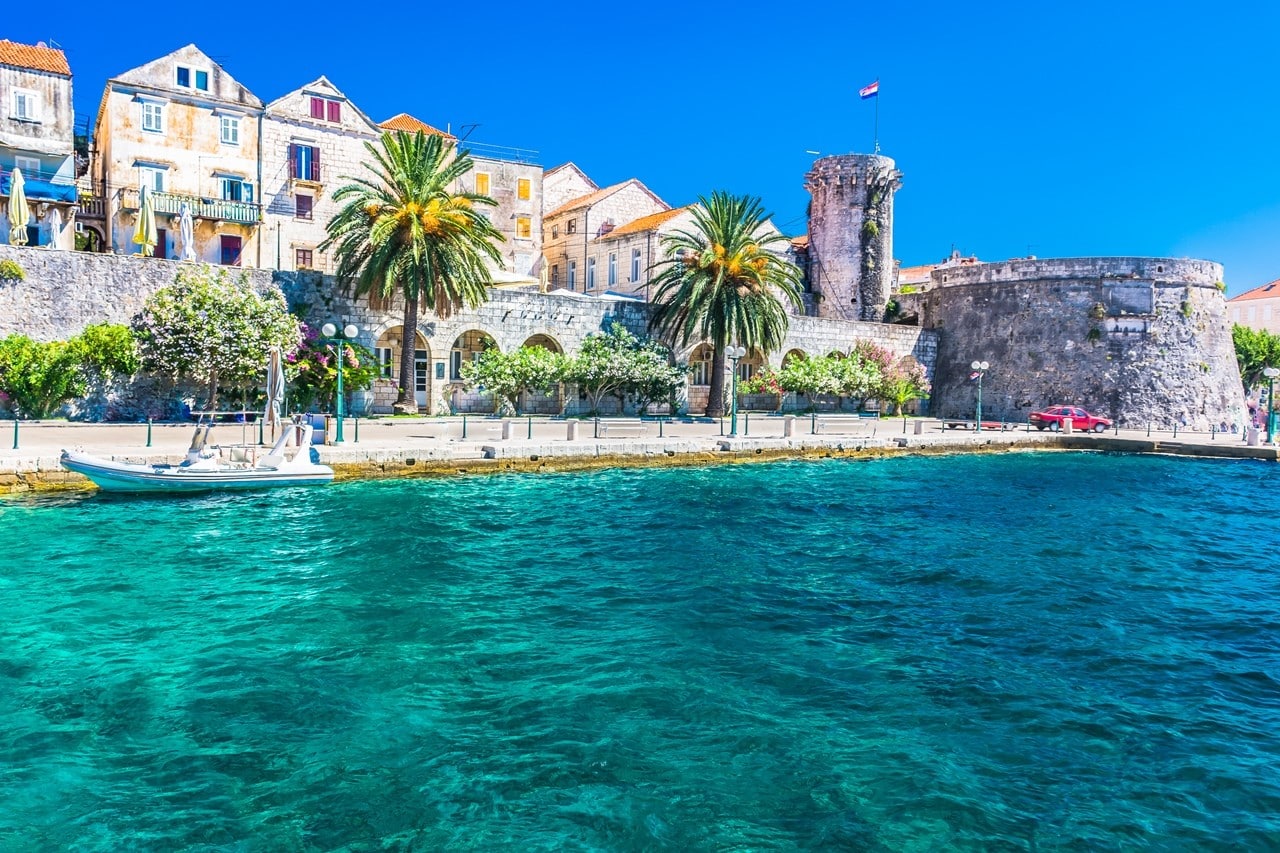 Undoubtedly, the island of Korcula occupies a privileged place among the Croatian islands. Probably there are more legends, stories, and monuments than anywhere else. It is said, for example, that Marco Polo was born here and there is a museum dedicated to him in the city of Korcula, in whose marina you can moor your boat to spend the night. Korcula is the typical medieval Dalmatian village, with red defense towers and colorful houses, but it is also one of the liveliest cities on the Croatian coast. If you have the possibility of being on the island on July 29, the feast of Saint Theodore, local patron, do not miss the staging of the Moreshka dance. It`s quite a show! 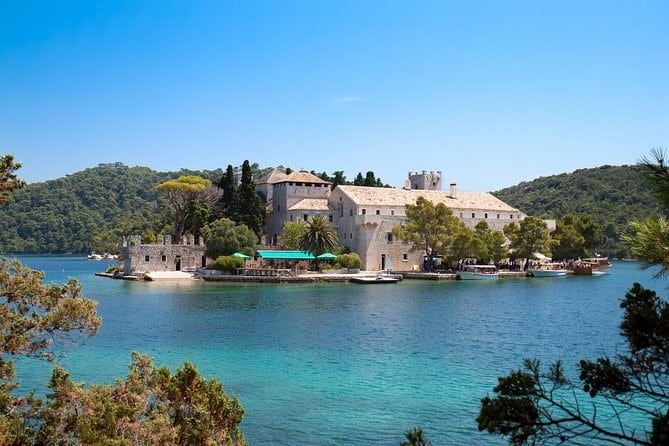 After breakfast in the shadow of the stern, sail to the surprising and unique natural park of Mljet, an island of legend with a love story that has Ulysses and Calypso as protagonists. First you can anchor in Polache Bay, where you can swim and eat crabs and fresh fish, and in the afternoon you can visit the salt lakes that are in the park: Large Lake (Veliko Jezero), with an island in its interior where it`s raised a Benedictine monastery from the 12th century – an island within an island, and the Small Lake (Malo Jezero). In reality, they`re not technically lakes, but two inlets linked to the sea by a small step barely noticeable, which makes them “salty”. 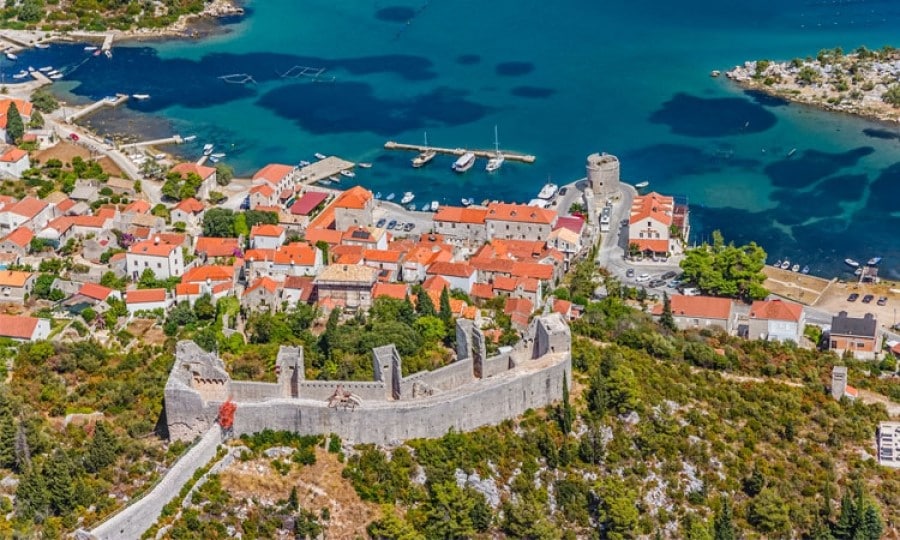 After several days sailing on a yacht or schooner from island to island, you can return to the mainland. The next destination is the small town of Ston, on the Peljesac peninsula, about 60 km from Dubrovnik. The most striking thing about Ston are its impressive walls. 5.5 km, the longest in Europe. They were built in 1333, when Ston belonged to the Republic of Dubrovnik and was one of the most important salt producers, and its good state of preservation is impressive. 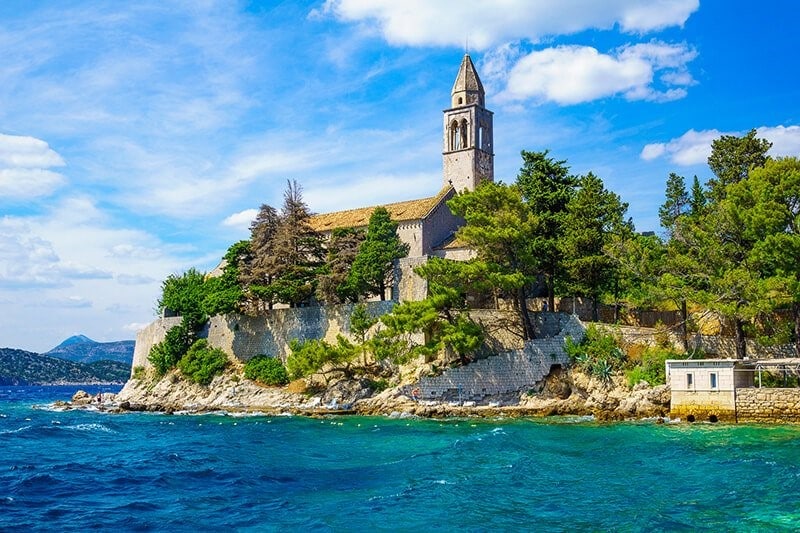 The island of Lopud is part of the Elaphite Islands that can be seen from Dubrovnik to the north. Many of these islands are very small and uninhabited. Only three are inhabited and Lopud is undoubtedly the most beautiful of the three, especially the bay called Sunj, at the southern tip of the island, where you can anchor the boat. It is a particularly round bay with a narrow entrance and a long sandy beach ideal for small children. On the beach, you can rent sunbeds and umbrellas and there are beach bars where you can eat or drink something. 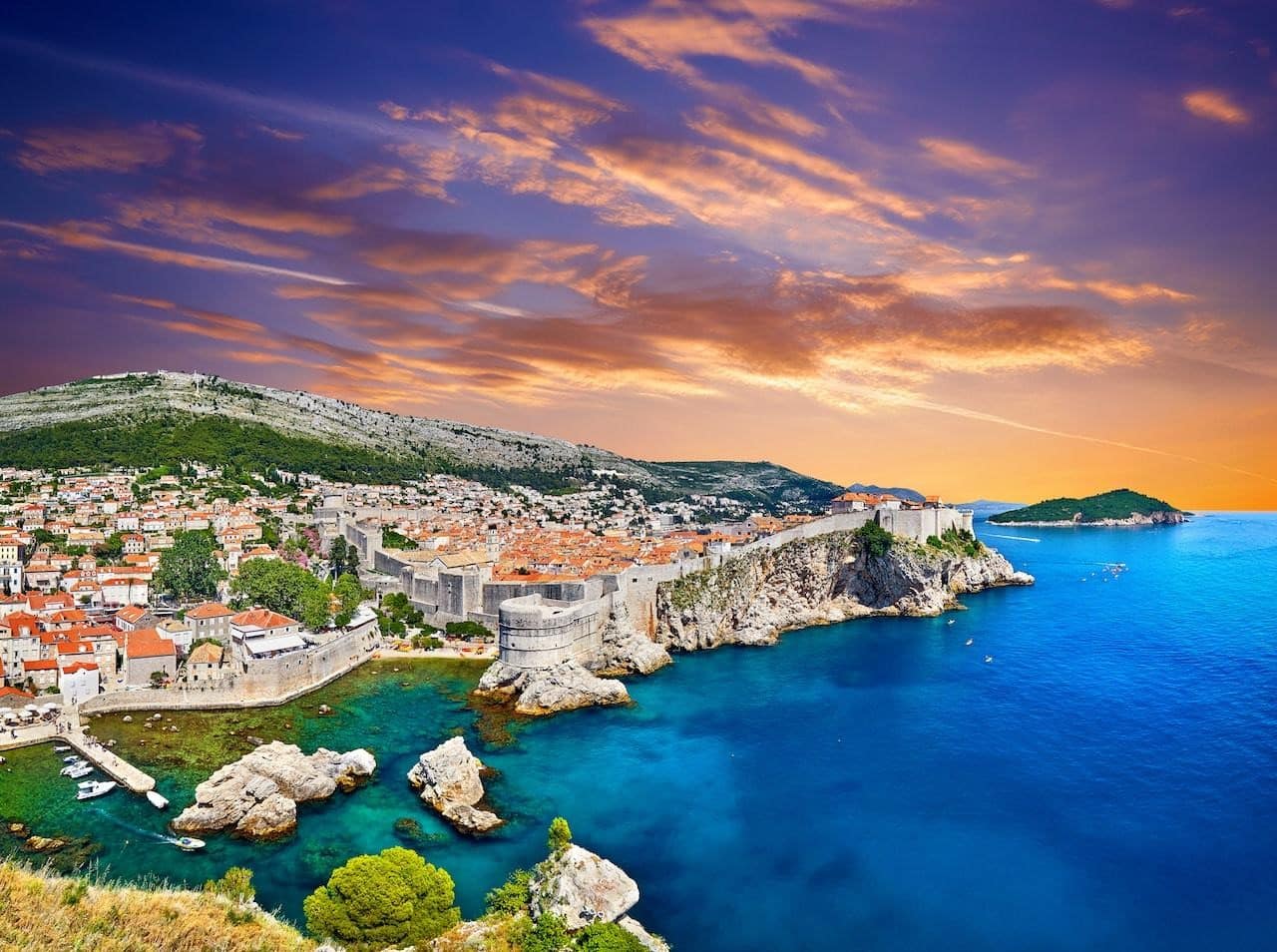 Everything good has to come to an end and arriving in Dubrovnik means it`s the end of your boat trip on the Adriatic. The end of a different vacation, relaxed and unforgettable.  We can suggest to stay a few days on the coast and enjoy the magic of Dubrovnik, known as “the Pearl of the Adriatic”.