What is seasickness, symptoms and how to react

Seasickness is one of the oldest forms of motion sickness, which is not surprising since mankind made the first of its long trips using this kind of transport. Mentions of this issue are found in the writings of Hippocrates, dated to the 5th century BC. It is known that the great naval commander Admiral Horatio Nelson suffered from nausea while on a boat, and Charles Darwin, on the contrary, set off on a world tour to treat motion sickness. What causes this hindrance and how should seasickness be treated in order to enjoy the pleasures of life, such as cruises around the Atlantic, traveling on yachts around the Mediterranean, and sailing? After all, some people choose to avoid stepping aboard a boat completely because of it.

The cause of motion sickness is the discrepancy between visual perception and sensations experienced by the body. The medical name for this mechanism is sensory conflict. For example, such a mismatch, which causes the syndrome of motion sickness, or kinetosis, can occur during sailing, when a person is inside the ship and does not see the waves on which the ship oscillates, but the body senses its movement. Psychological factors can also have a significant influence on the development of seasickness. People who have experienced the symptoms of seasickness in the past are pre-set to an unfavorable scenario, which again leads to ailments. 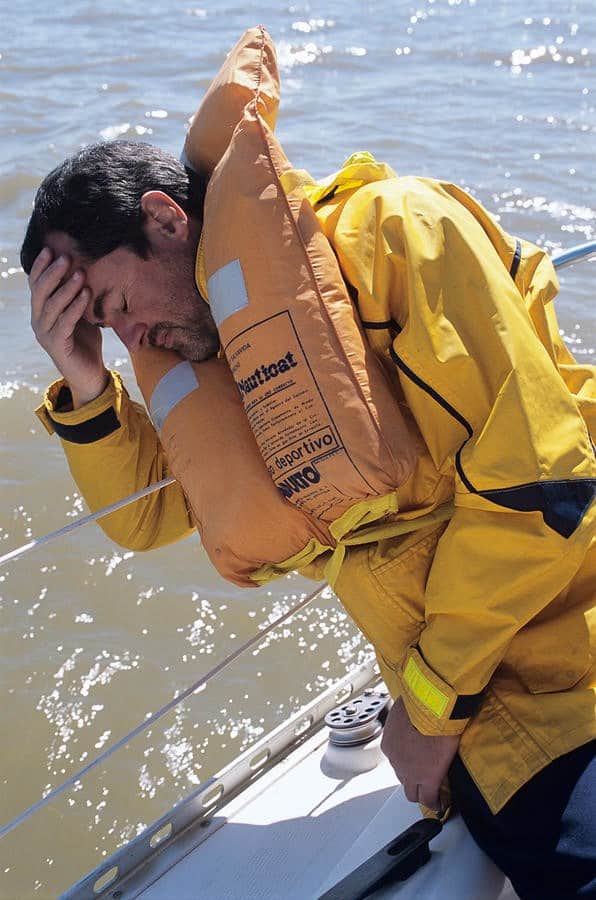 It has been established that the development of motion sickness syndrome is possible not only in water transport. Kinetosis can also occur in an airplane, a car, an elevator, and even when swinging on a swing. In all cases, motion sickness is usually short-lived. Moreover, its manifestations may have a different intensity. The main symptoms of seasickness include:

What to do when experiencing seasickness

The problem of seasickness does not mean at all that you will have to forever refuse to travel across the expanses of water. The following recommendations will help to get rid of seasickness or decrease its symptoms.

Drink water: If you are experiencing symptoms when the ship is swaying, a good remedy for seasickness is water with lemon, plain drinking water or another drink that you need to drink in small sips. This will help compensate for the loss of fluid and suppress the feeling of nausea.

Limit visual activity: Symptoms of seasickness are stronger with open eyes: this is because during the movement the “picture” changes continuously, and an excess of visual information enters the brain. Therefore, if nausea attacks appear when moving, it is better to try to take a relaxed posture in the cabin of the ship and close your eyes, or you can fix your eyes on any fixed object in the distance.

Go on a special diet: It is not good to overeat, but it is also not recommended to set sail on an empty stomach. If you are sick when driving on various types of transport, compliance with this recommendation will decrease the manifestations of seasickness. Choose a digestible nutritious dish and try to eat 1.5-2 hours before sailing to prevent nausea.

Take a certain position and choose a seat: Try to take a seat or cabin in the middle of the ship. It is also important to adopt a comfortable position in which the risk of seasickness is minimized (it is advised to tilt your head back a little and relax).

Provide fresh air: Remember that seasickness develops less often and is more easily tolerated outdoors when it is possible to observe the line of the horizon and the surrounding water surface. At the same time, inadequate ventilation in confined and enclosed spaces, and the high temperature of the air in the cabins on the ship may exacerbate the seasickness syndrome.

There are pharmaceutical solutions for seasickness, like motion sickness patches (which are applied behind the ear, at least 8 hours before sailing and the duration of which lasts for up to three days, with possible side effects: dry mouth and dizziness), medicines which act as a mild sedative and are not recommended if you plan to consume alcohol) or stronger drugs that prevent nausea, but they need a prescription from your GP.

If you know that you suffer from seasickness, do not leave on a cruise … at least not immediately. Begin with shorter tours, in smaller boats, until you get used to the sailing. After all, motion sickness should not be a reason to stay on land and miss the beauty of sailing.