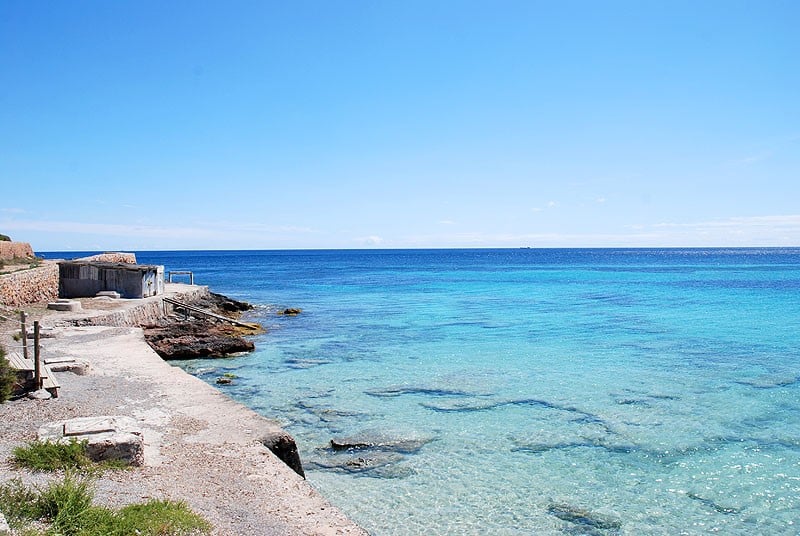 A week plan for Balearic Islands:

Can you think of a better plan for this summer than to meet friends or family and go sailing along the coast of Ibiza and Formentera? If your answer is no, you do not have to keep looking. Just rent a boat with skipper and/or crew and let yourself be guided to a cruise of crystal-clear waters, white sand beaches, and unforgettable sunsets. And if you already know how to sail, surely you can charter a boat without a skipper. What are you waiting for?

Your sailing route can begin at the marina of Ibiza, located on the extension of the promenade of the island’s capital, a bit away from the city center. In contrast, it is a fairly quiet place at night despite having more than five hundred moorings, a good part of them for rental boats. Before boarding, it is worth getting lost in the small cobbled streets of the old part of Ibiza, known as Dalt Vila, and going up to the medieval castle, from where you can enjoy breathtaking views of the city. Sail south to anchor your catamaran, sailboat or yacht in front of Es Cavallet, a kilometric and quite undisturbed beach, protected by sand dunes and a green belt of hills. When the East wind blows, big waves are raising, that delight the most experienced surfers. 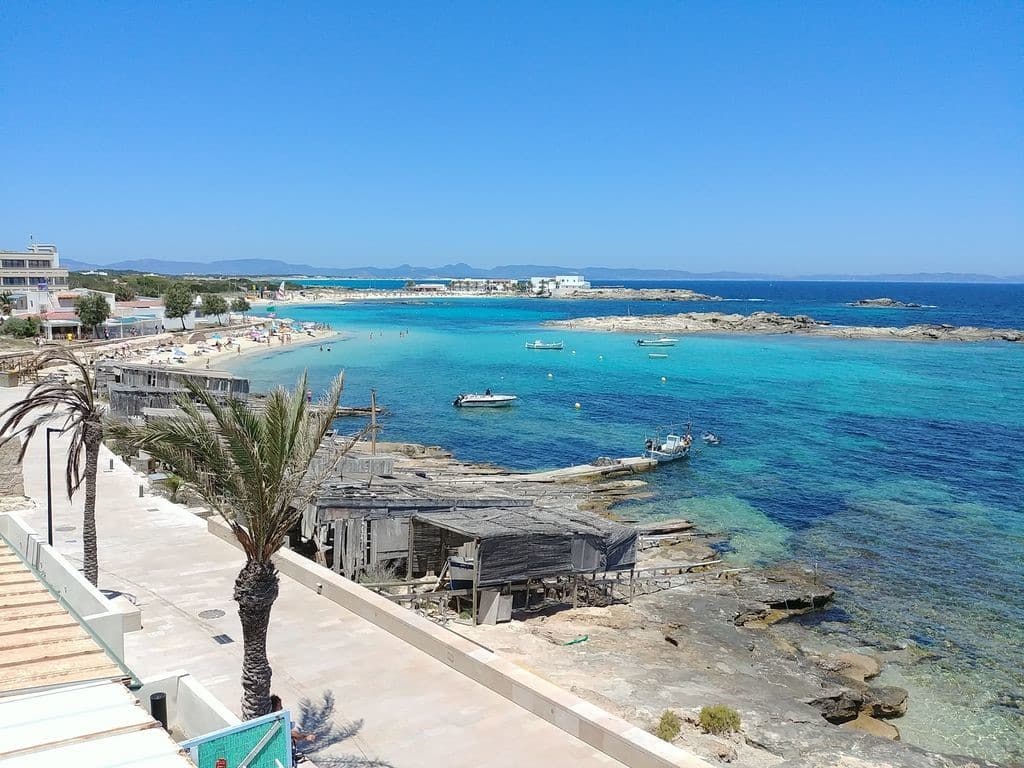 Es Cavallet is officially a nudist beach, although nudism is practiced mainly in the middle part of the beach, hidden by the dunes. It is also known as the gayest beach on the Ibizan coast thanks to the Chiringay, a beach bar located at the southern end of the beach that offers disco and cocktails all day. At the opposite end of the beach, there are two restaurants, El Chiringuito, and La Escollera, quite exclusive and where it`s easy to find celebrities drinking something.

The first contact with Formentera will be Es Pujols, a tourist municipality that gathers the three most inquired characteristics by tourists: sun, beach, and nightlife. The namesake beach, with fine white sand and transparent waters, is a good picture of what you are going to find on all the beaches of the island. Whether sailing on a sailboat or by yacht, the best marine and underwater conditions for anchoring will be found in the southeast area of Punta Prima.

Es Caló de Sant Agustí (Es Caló) is an old fishing village located at the foot of the mountain of La Mola, in one of the most privileged areas of Formentera. It has a natural harbor, that serves as a refugee from winds and tides where you can moor your boat and start to explore the small and beautiful beaches or enjoy the island’s gastronomy. Although it`s a small place, there are several restaurants that offer good fish and typical dishes of Formentera, such as the Burrida de Ratjada (skate stewed with chopped almonds) or the Guisat de Marisco. Sitting on any of its terraces facing the sea you can also enjoy great views over the sea and the coast of neighboring Ibiza while savoring some of its traditional digestifs, such as Frígola, Hierbas Ibicencas or Palo. Continue coasting Formentera with your yacht and after passing Far de la Mola you can go to the beach of Migjorn, one of the largest in Formentera, with more than 5 km of sandy coast that occupies almost all the south of the island. 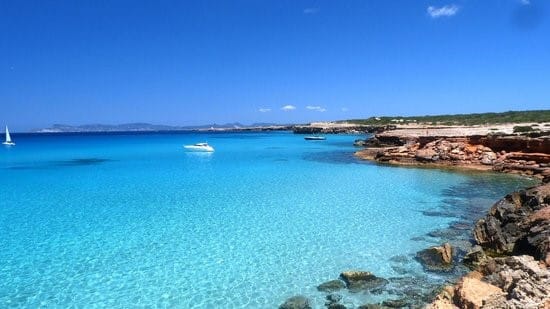 Playa de Migjorn is an ideal place to practice water sports or simply to enjoy the tranquility offered by its nooks of wild beauty and its pristine waters. Of course, you must take some precautions when anchoring because there are some rock barriers parallel to the coast that could damage your boat. The best thing will be to anchor your boat 100 meters from the shore.

La Cala Saona, interceding between two cliffs, has remained quite undisturbed – there is only one small tourist establishment. It`s the only beach, considered as such, that appears on the west coast of the island of Formentera. The last stop before sailing back to Ibiza should be La Savina, where the port of Formentera is located. La Savina became a port when the shelter was artificially closed, joining one point of the island to an island, called precisely La Savina. The traffic in the port is continuous, with the presence of both traditional boats used for excursions along the coast and rental boats (yachts, catamarans, schooners or sailboats) from Ibiza. 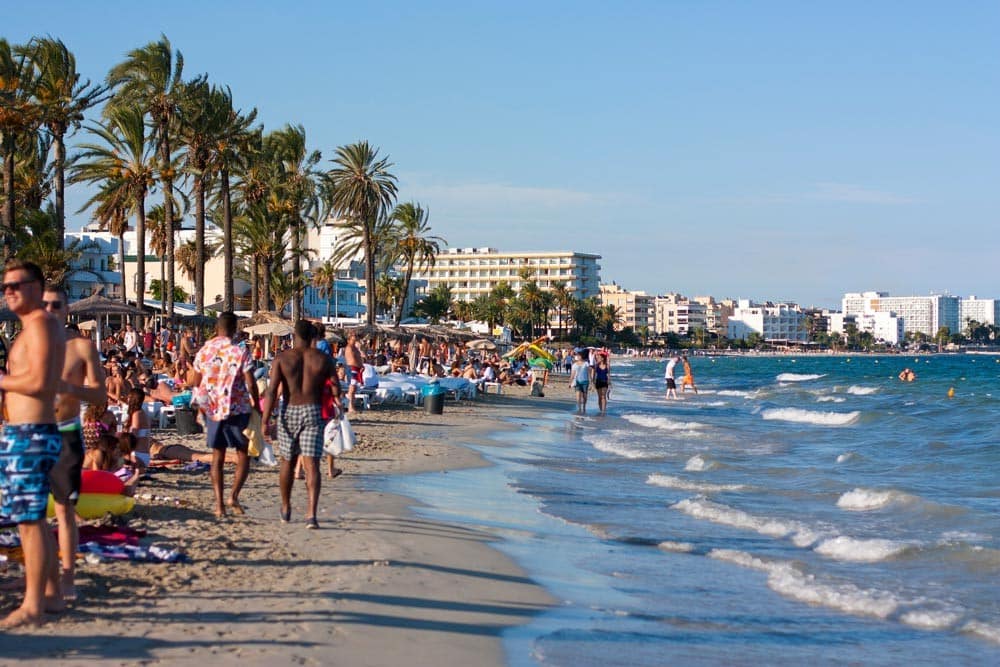 On the way to Ibiza Nueva, you can anchor your boat in Playa d’en Bossa, located about 2 miles from the port. It`s a very popular beach, especially among enthusiasts of water sports. There you can take a bath before continuing to Ibiza, where the trip ends. If after seven days of relaxation you feel like you want to move, you can go dancing to one of the famous clubs of Ibiza, but there are other options to enjoy the night, such as sitting on a terrace of the port, shopping ( during the high season the shops are open until midnight!), go for tapas or see the famous hippy market Las Dalias. A final round for a holiday in which you`ll get to know the islands a little more than before.

If you want to visit other places, you can always modify the route according to your preferences.